Memmecs are rare minor Enemies appearing in Specter of Torment.

Memmec appear as fennecs with a body shaped like a treasure chest. In the wild, they mimic a treasure chest and jump at anyone approaching them. They release large sums of treasures when hit and have four hit points. A faster way to defeat them is using the Dread Talon, however the total gold dropped in this way will result minor compared to the one dropped by simply hitting them. Despite their cute appearance they will defend their treasure fiercely, dishing out two full health bubbles for each time they attack the player.

Only two wild Memmecs can be found during the campaign, in off-road rooms of the Explodatorium and the Lost City.

There is a docile Memmec at the Tower of Fate in the library above the Magic Mirror. Specter Knight can pet it by holding [DOWN] next to it, after looking around to see if anyone notices. It will also start playing with one of the purple orbs in the same room if Specter Knight kicks one to it, releasing treasures while doing so.

One last Memmec appears in the campaign's ending scenes, sleeping next to Farrels at the Village when Specter Knight brings back Reize.

One of the Joustus cards in King of Cards is a Memmec card which has 2 Double Arrows facing right and up. 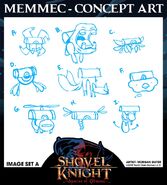 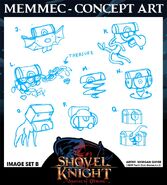 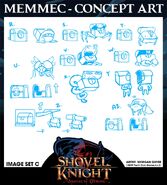 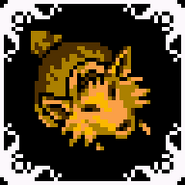 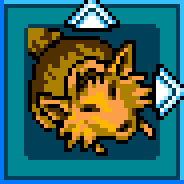 Memmec's Joustus card.
Add a photo to this gallery
Retrieved from "https://shovelknight.fandom.com/wiki/Memmec?oldid=35956"
Community content is available under CC-BY-SA unless otherwise noted.