Wisp Invoker, Servant to the Enchantress

Missy is a supporting character in Specter of Torment encountered at the Tower of Fate. She acts as a vendor similar to Chester for Specter Knight, allowing the purchase of any Darkness or Willful Wisps missed during levels for 1000 gold for the Plains wisp and 4000 for all other stages.

Missy is a short, green-haired female that is covered from her neck to her feet in a black and green cloak. She wears a hat with a gem that has the same green color as her over-all appearance. She has curly hair and black eyes that only hold a small glint in her avatar.

Missy seems to be on friendly terms with Specter Knight. Despite the fact that she is one of his servants, like Dark Acolyte, Missy and Specter Knight have a vendor-and-customer-like relationship, since if Specter Knight misses any Wisp Chests, she will sell these Wisps for a high amount gold. Moreover, Missy calls Specter Knight "Specty", and he never corrects her.

Dark Acolyte and Missy seem to be friends. In the ending of King of Cards, both are seen spying Specter Knight as he reflects on his Keepsake Locket. In the ending of Specter of Torment, Missy is seen going to the Troupple King with Dark Acolyte because he was too scared to go alone, showing she is supportive towards her friend.

Missy serves the Enchantress at the Tower of Fate by conjuring any Wisp Specter Knight might have missed when traveling through the Valley.

She seems panicked after the Dark Mirror shatters and the Tower starts shaking. After this event and the formation of the Order of No Quarter, Missy accompanies the Dark Acolyte to the Troupple Pond when he seeks redemption. She did so because the Dark Acolyte was too scared to face the Troupple King again by himself.[1] She also rejoices at his choice to be a Troupple Acolyte again.

In King of Cards, Missy is one the Joustus players needed to be challenged to progress in the Tower of Joustus. When defeated she will give King Knight a wisp, which when consumed will give the screen a wavy affect.

"Missy: Oh hey, Specty. Welcome back! If you ever miss any Wisp Chests, I can summon their contents here! But you know.. Supplies. I need gold! It isn't cheap to summon a wisp, whether it's for Will or Darkness!"

If missing a wisp chest:

"Missy: Hey, you missed a Wisp Chests! Want to have a look?"

When not missing wisp chests in any level completed so far (the wisps of stages already completed will be missing):

"Missy: I've got nothing to sell you. You're so meticulous, Specty! But maybe...maybe I can still help! Let's see... Darkness wisps are in Clockwork Tower, Explodatorium, or the Lich Yard! Any other new place and you'll find a Willfull wisp!"

When collecting all Darkness wisps but missing some Willful wisps:

"Missy: I've got nothing to sell you. You're so meticulous, Specty! But maybe...maybe I can still help! Let's see... Well, you've found every Darkness wisp. You'll only find Willfull wisp in any new place!"

When all wisps have been collected:

"Missy: I've got nothing to sell you. You're so meticulous, Specty!"

"Missy: Look at this Wisp chest that Specty missed! He wasn't being very meticulous, was he? If you beat me at Joustus,
hee
hee,
I'll let you see the Wisp up close!" 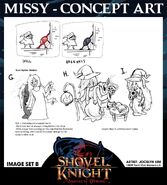 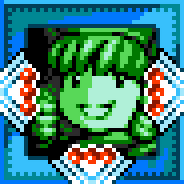 Missy can be seen bouncing in excitement whenever she has wisps available for purchase.
Add a photo to this gallery

Retrieved from "https://shovelknight.fandom.com/wiki/Missy?oldid=37124"
Community content is available under CC-BY-SA unless otherwise noted.