Shovel Knight Wiki
Register
Don't have an account?
Sign In
Advertisement
in: Shovel of Hope NPCs, Shovel of Hope Bosses, Plague of Shadows NPCs,
and 8 more

Knight
Excavator of the Order

The Claws of Fate

Mole Knight is one of eight Knights of the Order of No Quarter who serves the Enchantress and an expert excavator. He is the boss of the Lost City.

Mole Knight and Tinker Knight, as Shovel Knight Showdown states, are like oil and water, meaning that Tinker Knight believes safety should always be the first thing to consider while Mole Knight does what he thinks is the best thing to do, dangerous or not. They, however, because of the Order, work together sometimes, such as in the Magma Furnace of the Lost City where they cooperated.

Before Treasure Trove, Mole Knight made a reputation for himself in the Valley for his impeccable digging and treasure hunting skills. With his crew, he set a dig site in the Lost City with the intention of pilfering all of its untouched treasures. He even set there a hot tub for his minions and himself to relax during their rare breaks.

In King of Cards, King Knight inadvertently breaks the Lost Hot Tub by drilling into it while Mole Knight was taking one of his rare breaks. The excavator is even more angered when the unapologetic gilded dandy shows no respect for the rules of his dig site, and attacks him to throw him out. After his defeat, Mole Knight hops aboard the Glidewing to play a few games of Joustus. He feels uneasy by the airship's lavish looks, and would rather be back in his dig site, if not for the card game.
In the ending, Mole Knight is seen travelling through the Birder Bluffs with Polar Knight and Tinker Knight to reach the Tower of Fate; all three knights have accepted an invitation to the dark tower. Black Knight spies on them while concealing himself.

In Specter of Torment, Mole Knight is sought in the Lost City by Specter Knight. The Enchantress needs competent excavators to either dig out great valuables or undermine her enemies. The digger appreciates that his skills are recognized for their worth. However, he is not looking for any new employment and the phantom knight is impeding on his current work.


After they fight it out and Specter Knight defeats Mole Knight, the excavator shows up in the dining hall of the Tower of Fate. Mole Knight is disappointed with the quality of service in the Tower, and asks Specter Knight if he could orders to bring bread to his table.


In the ending, Mole Knight in enjoying some relaxation with his Moler minions in the now fixed Lost Hot Tub. He later bows down to the Enchantress in her throne room at the Tower of Fate along with the rest of the newly formed Order of No Quarter.

Shortly before Specter Knight's confrontation with the Enchantress in Specter of Torment, Mole Knight was tunneling through the Lost City when he was captured by the Mirror of Fate wreaking havok. He awakes in the Colosseum, and sees the place and foes appearing before him as new opportunities to increase his wealth.


As he progresses through the Mirror's worlds, Mole Knight Meets Treasure Knight in the Goo Gorge and requests his help to escape. The marine plunderer isn't against that offer but wants compensation for his work. The fiery digger then proposes to team up to steal as much loot as they can on their way out. The opportunistic treasure hunters come to an agreement and partner for their next fight. They meet again before the Mirror Chamber. While both knights were succesful on their respective treasure hunt, they had planned to steal from the other all along, although Treasure Knight was the first to come out. They fight it out and Mole Knight emerges victorious, before proceeding to shatter the Mirror of Fate and freeing himself. Back in the real world, both treasure hunters make peace, vowing to not step on each other's hunting grounds. At least for now.


While still trapped, Mole Knight meets Tinker Knight at the Piston Furnace. The panicked engineer wants to team up with the excavator to escape, but a misunderstanding leads to both wanting to take command, then to a fight which Tinker Knight wins. They meet again before the Mirror's Chamber. After facing the dangers of the Mirror's worlds alone, Mole Knight is more inclined in accepting Tinker Knight's offer. The over-confident engineer however disses his colleague as unreliable, leading to a second fight, again lost by Mole Knight. Later in the real Lost City, Tinker Knight and Mole Knight finally make peace in order to work on the Order's plans. They cooperate to create a magma furnace operating within safety parameters.

In Shovel of Hope, Shovel Knight on his way to the Tower of Fate, faces Mole Knight deep in the Lost City. The villainous knight first mistakes the Blue Borrower for a lost spelunker, then mocks his sense of justice and Shovel Blade.

After Mole Knight's defeat, the diggers face each other again at the dining hall of the Tower of Fate, surrounded by the rest of Mole Knight's colleagues. Mole Knight is the first to suggest a rematch between Shovel Knight and the Order of No Quarter all together. After the Battle Royale, if the Blue Borrower helps Mole Knight out of the pit he fell into, the fiery digger compliments him on his digging skills and hopes to be sharing notes some time.


In the ending, after the end of the Order of No Quarter, Mole Knight is seen excavating and leading an expedition of Knights and Horse Advenurers deep in the Lost City, this time sharing his valuable findings.

In Plague of Shadows, Mole Knight mistakes Plague Knight for the demolition expert he asked from the Order of No Quarter. The rogue alchemist, who had traveled to the Lost City to steal his colleague's Essence, does not hide that he is up to mischief. Having no time to lose, Mole Knight charges him.


After the digger's defeat, they meet again in the Tower's dining hall when Plague Knight unknowingly drops down in the middle of his former colleagues' banquet. Shovel Knight follows him but passes out from the fall. Mole Knight is however first concerned with the purpose of the rogue knight's visit. He enrages when the mad alchemist simply hints that he used the Order of No Quarter to follow his own plan. He is eventually defeated once again by Plague Knight and left to hang over a pit by an uncaring Shovel Knight, while the alchemist makes his escape.


In the ending, after the fall of the Order, Plague Minions have invested Mole Knight's dig site in the Lost City. There, the digger uses his fire skills to help Plague Knight and Mona produce Slimulacra en mass from a Goo-filled cauldron.

In Pocket Dungeon, Mole Knight is one of the many knights who were trapped inside the titular artifact. He can be randomly encountered as a boss fight and recruited to Puzzle Knight's campsite.

Mole Knight is a very high-mobility boss. It is difficult to do much damage to him in one go. When the fight begins, he will shoot out of the walls at high speed in an attempt to ram into you. The best thing to do in this phase is to charge up your Shovel, and attack him with it when he comes towards you, as this will negate his attack and damage him at the same time. After shooting out of the walls a few times, Mole Knight will land on his belly and slide across the ground, with his armor shooting out sparks from grinding against the ground. After this, he will dig up blocks to launch at you; the stacks of blocks he sends at you get progressively bigger the lower his health is. If you manage to get on top of him and Shovel Drop onto him, you can rack up a lot of damage on Mole Knight as he is stationary during this attack. After doing some damage to him, he will burrow underground and hide under one of four dirt piles. It is easy to find which one Mole Knight is under, as his visor will be peeking out. Digging this pile up stuns him for a short time, but watch out as a mole enemy is hiding under another pile and will damage you. After he emerges from the ground, he will call down magma to cover him, and he launches balls of magma which loosely track your movement while drops of magma fall from the ceiling. He is invincible while this attack goes on, so stay away from him and try to dodge the balls of magma. You can, however, hit some of the balls of magma back at him for a little bit of damage; the flashing magma balls do extra damage. When this attack ends, Mole Knight will stomp the ground to make some dirt blocks fall from the ceiling, and then he'll repeat the entire cycle.

In Specter of Torment, Mole Knight's battle is largely the same, but the dirt blocks he attacks with are replaced with green slime blocks. Also, he now covers himself in green slime instead of magma, which makes him able to attack by bouncing around the room until the slime wears off. 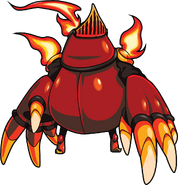 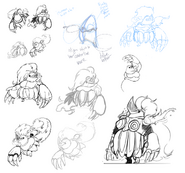 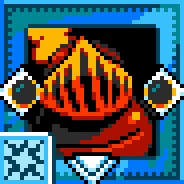 Mole Knight at the Glidewing. 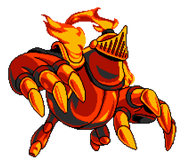 Mole Knight when using him to reach the normal ending.