Molers appear in various stages when digging up specific Dig Piles. When uncovered, they skitter back and forth and will damage the protagonist nearby. They possess only one hit point and deal half a damage point. They do not drop any treasures when defeated, except the occasional jar. They are found in the Lich Yard Encounter, the Lost City, the Stranded Ship, the Tower of Fate: Entrance, and the Frigid Flight Relic course. 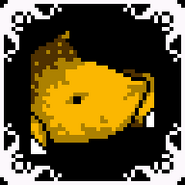 Joustus card portrait.
Add a photo to this gallery
Retrieved from "https://shovelknight.fandom.com/wiki/Moler?oldid=29014"
Community content is available under CC-BY-SA unless otherwise noted.