Mom is a supporting character in Shovel Knight: King of Cards. She is the mother of King Knight who cooks up power-enhancing meals for him.[1]

King Knight's Mom wears an elegant orange and yellow dress accompanied by white fur and long orange gloves. She has brown skin and white hair tied up into a bun.

King Knight’s doting mother cooks up power-enhancing meals to raise your maximum health or vigor. An avid reader of King’s Weekly, she’s positive and encouraging towards the monarchical goals of her shining son.[2] She is constantly giving King Knight compliments and calling him names like "her prince" and "pumpkin-pauldron prince", and supportive of his devotion to become a king. She also enjoys cooking home-cooked meals for King Knight.

King Knight's mom is very caring and spoiling to King Knight. She constantly treats her son like a child, calling him her "pumpkin-pauldron prince" and so on. Although he acts like he dislikes the attention, deep down he seeks her approval, which he lost at the end of King of Cards in exchange of the Pridemoor Keep's throne.

Before King Knight even started his quest to become King of Cards, his mother was already an avid fan of King Pridemoor. After entering the Glidewing, they both quickly developed a love interest for each other and constantly exchanged flirting, what disgusted King Knight.

Mom first appears when King Knight arrives at The Homestead after completing the Plains: Mossy Mountain stage. She welcomes him and asks if he had retrieved the cooking ingredients she had requested him to get. He responds claiming that he is a king and only kings have "subjects" who run errands for him. Mom diligently accepts and offers him a home-cooked meal. Her meals consist of Hearty Meat Pies, which permanently increases King Knight's health points by one heart.

When King Knight boards the Glidewing after revisiting the Homestead, Mom will board the ship. With a galley on-board, she continues to cook meals for her son.

After recruiting King Pridemoor to the Glidewing's crew, Mom seems to take a liking to him, talking to him about her son and discussing her affection toward him.

At the end of the game, Mom disapproves of King Knight's decision to side with the Enchantress, and take Pridemoor Keep as his own, walking out with King Pridemoor, much to King Knight's dismay.

Mom is a merchant who sells health upgrades to King Knight. She sells Hearty Meat Pies, which permanently increases King Knight's health points by one heart, with a max of 10.

When she boards the Glidewing, she compliments the ships galley and offers the ability to make Vigor Cream Pies, which permanently increase King Knight's max vigor by 10, with a max of 100.

Note: This is Mom's deck from Challenge Mode, she can't be battled in the normal campaign.

"Mom:
Oh!
My little prince! Do you return to save the day with the ingredients I requested?"

"King Knight:
Mother!
I am no prince, I am a king! And mother, kings have
subjects
who do their bidding for them!"

"Mom: Oh, my precious love. Those are rats, not subjects..."

"King Knight: My rats are loyal to the last. They're my starter subjects! Part of my grand plan! I must acquire a Joustus deck and be declared the King of Cards!
This is far more important than errands.
"

When King Knight talks to her again:

"Mom: Oh, my little
pumpkin-pauldron prince!
You look so handsome! You'll make a wise and noble king! Sweetie. Have you brought some coin? I'd love to cook for you!"

If King Knight denies her request:

When King Knight leaves The Homestead after denying her request:

After defeating the Blubber Meanies in the Glidewing during Propeller Knight's attack:

"Mom: Oh, heavens! What a ruckus! Are we now doomed to a fiery fate?"

"King Pridemoor: Hold fast with me, milady! Perhaps Plume and Beaky will heed my call and whisk us all to safety!" 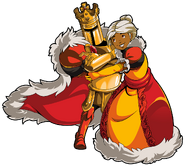 King Knight and his mom. 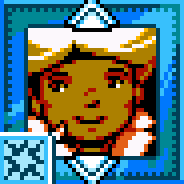 Cheering animation.
Add a photo to this gallery

Retrieved from "https://shovelknight.fandom.com/wiki/Mom?oldid=34427"
Community content is available under CC-BY-SA unless otherwise noted.