Mr. Hat is one of the Wandering Travellers in the world of Shovel Knight: Treasure Trove. This character was created by Alexander “Hatman” Hatzikides as a Director for a Day.[1] He runs the Fancy Shop at the Armor Outpost and specializes in hats.

Mr. Hat is a sophisticated man, wearing a large gray and brown trench coat, brown trousers, and brown shoes. He wears a golden helmet, hiding his face, and carries a wooden cane with a red jewel at the tip. When fighting, he puts a hat on his head, with each type of hat defining his fighting style. He then uses his cane either to displace himself or as a sword.

After Mr. Hat's Fancy Shop falls into the Armor Outpost, Baz manages to steal his armor from the establishment and get away with it, until both are trapped in the Mirror of Fate and fight. In the end, Baz pays by cleaning the shop's floor until his debt is settled.

Mr. Hat is wanted by the guardsmen of the Pridemoor Kingdom for pilfering hats, and there are many "Wanted" posters of him in the Village. After being trapped in the Mirror of Fate alongside some Goldarmors, Mr. Hat steals a helmet from one of those to add to his collection, not worrying about his criminal record.

In Shovel of Hope, Mr. Hat is tending to his shop. However, as more hats are getting bought, he starts obsessing on refilling his stock. With the last customer gone, he addresses Shovel Knight about his helmet, and explains that each hat grants him the power of its previous owner. He then engages Shovel Knight in combat to take his helmet.

Mr. Hat finally regains his senses after his defeat, but still obsesses about Shovel Knight's hat. He leaves the shop after the knight makes him remark it is a helmet. He can then be found three times at the Outpost while not leaving the area. When found, he gives Shovel Knight gold to make the knight forget about him. He grows unnerved the third time, and leaves the Outpost by launching himself from a catapult while laughing maniacally.

In Plague of Shadows, Mr. Hat doesn't leave his shop after Plague Knight's attack on the Armor Outpost. He first feels insulted when the knight asks if he crafts hoods, then enraged by Plague Knight's belittling of hats, before engaging him in combat.

After the fight, Mr. Hat explains how his power comes from the hats he wears. Plague Knight is impressed and wants to buy his hats, but he explains how the powers only work on himself. He then leaves the shop with no grudge towards Plague Knight.

In Specter of Torment, Mr. Hat appears briefly in the ending, when the army of the Enchantress attacks the Armor Outpost. He flees from his fancy shop during the attack.

In King of Cards, it's revealed that Mr. Hat's shop was originally further up in the mountainous region of the Valley; his shop, known as the Fancy Shop, can be found in the Birder Kingdom. When spoken to in this location, Mr. Hat offers upgrades for King Knight that go over the gold limit and cannot be bought; thus, the only option for King Knight is to leave the shop and exit the level. However, as King Knight makes his way to the rat rope ring, Mr. Hat stalks King Knight and repeatedly asks him to come back and buy something. Finally, once King Knight tries to leave on the rat rope, Mr. Hat cuts the rope, preventing King Knight from leaving, and demands that he give up his "hat." He then engages in combat to take King Knight's crown, but is beaten. After his defeat, Mr. Hat explains that he tends to go crazy due to cabin fever since his shop is in such an isolated location where hardly anyone stops by. He then begs King Knight to let him on the Glidewing, and King Knight agrees after Mr. Hat also offers to fix the rat rope. Afterwards, the duo uses the rope to pull Mr. Hat's shop up and attach it to the Glidewing, after which Mr. Hat expresses his gratitude and lowers all his prices.

In the ending sequence, when the Glidewing is attacked by the Enchantress, Mr. Hat's shop is knocked off of the Glidewing, causing it to fall and land in the Armor Outpost, where several new customers including Baz show up to browse the shop. Alternatively, if King Knight never recruited Mr. Hat, Mr. Hat becomes fed up with the lack of customers in the Void Crater and drags the shop himself to the Armor Outpost.

These are the upgrades that can be bought from Mr. Hat in King of Cards (the prices shown here are the prices he charges after his shop has been added to the Glidewing).

During his battle, Mr. Hat switches between two different hats that allow him to use different fighting styles. He starts the battle with a warrior's helmet, which has him run up to the player and use melee attacks with his cane-sword. He'll then throw some more swords in the air and have them fall to the ground, and then try to strike the player with his sword again. If Mr. Hat's sword strikes any of the other swords stuck in the ground, they'll get knocked upward and then fly straight ahead in the player's direction, ultimately flying off the screen. After this, Mr. Hat switches out his warrior helmet for a feathered beret, which allows him to bounce around on his cane and leap into the air, flinging plates at the player as he slowly descends to the ground. Then, he'll throw some teacups at the player and bounce around some more, before switching back to the warrior helmet and restarting the cycle.

In King of Cards, however, Mr. Hat has a second phase that he initiates when he's low on health. In this phase, he puts on a crown and pulls out a giant golden sword. He also regains all health. Aside from using this sword to deliver melee attacks, Mr. Hat can also attack by jumping off the walls of the room and then slamming down, creating sparks that roll a short distance across the ground before disappearing. Sometimes, Mr. Hat will go off-screen and return riding a horse carriage, trying to ram King Knight with it. After hitting the carriage three times, Mr. Hat gets knocked off and resumes his normal attack patterns. Once he loses half his health in this phase, Mr. Hat rolls out a red carpet which enhances some of his attacks; when he ground pounds on the carpet, it sends ripples that travel across the entire screen, and his horse carriage also sends ripples across the carpet when turning around.

Mr. Hat has his own unique card, earned after his fight. There are double arrows up, left, and down. It also has the Cascade ability.

When talked to with all three customers present:

"Mr. Hat: Ahhh, hats, my greatest passion. Nothing I enjoy more than the crisp snap of a well-tailored brim."

After buying a hat for one customer:

"Mr. Hat:
Heh heh
, running out of customers, one by one. The hats are going. How shall I restock?"

After buying hats for two customers:

After buying hats for all customers:

"Mr. Hat: Argh! My precious hats! That's a lovely helmet, so lovely. So lovely!"
"Shovel Knight: I must inquire, sir, about your curious collection."
"Mr. Hat: Travel the land far and wide, I do -- searching, learning, teaching, collecting! All shapes! All sizes! Hats! Each one I wear grants me a new power. And your hat looks powerful indeed!"
"Shovel Knight: Intriguing, but ... I am rather attached to my helmet."
"Mr. Hat: Yes, yes... about that...
Heh heh heh!
"

When finding him outside once:

"Mr. Hat: Oh bother...You found me. I'm so embarrassed! I promise I'll pester you no longer! Here's some gold for all the trouble."

"Mr. Hat:
You?!
You can't be serious! How did you find me again? You're following me everywhere! OK, OK! I won't come back. Just take some more of my gold and leave me to my hats!"

"Mr. Hat:
Impossible!
Do you think your aggression is teaching me a lesson about my fancy hat obsession? I suppose I'm about to leave an impression! You'll never see me again... or will you?!
Mwahaha!
"

"Mr. Hat: Ah! So you're the one who's scaring off all my customers! It's enough to make a haberdasher flip his lid!"
"Plague Knight: Hee hee, do you do hoods? I could use a blast-proof lining on mine!"
"Mr. Hat:
!!!
You miscreant!
Hoods!
That's not even a proper hat! No structure, no support! No...
Flair!
"
"Plague Knight: Hats are a waste of felt, old man! They fall off in the wind! Hoods are objectively more utilitarian!"
"Mr. Hat: How... how
dare
you, sirrah! I demand satisfaction!
Have at you!
"

When talked to (in the Fancy Shop):

"Mr. Hat: Oh! A gold-clad guest, with a platinum panache! How lovely! Welcome to my fancy shop!"
"Mr. Hat: I sell only the fanciest fashions. Clearly, you're in the right place. Look at that hat! It's positively
regal
."
"King Knight: This is a crown, not a hat. Do you know what that makes me?"
"Mr. Hat: Delightfully modest?
Ha!
A peek at my noblest wares, mayhaps?"

If entering the Fancy Shop but leaving without talking to him:

"Mr. Hat: Is there nothing that suits you? Come back...
I was looking foward to trying on a ne
w hat!
"

Trying to leave the level/Before the battle:

"Mr. Hat: End of the line, you tight-fisted curmudgeon!
I'll have your hat, if it's the last thing I do!
"

"Mr. Hat: Enough! I know not what came over me! Your hat...I can't look away! It shines and glimmers maddeningly!"
"Mr. Hat: ...Just a bit of cabin fever, really. It's hard to make a friend or a sale in such a remote location!"
"King Knight: Well, that's all very interesting, but I had better get going."
"Mr. Hat: I'd do
anything
for passage on your airship, to escape this dead location! Here, let me mend your rope!"

After the rope is repaired:

When Mr. Hat boards the Glidewing:

"Mr. Hat: All my thanks for this new location! It simply gleams with rustic potential."
"Mr. Hat: As for appointments,
you're
fancy enough not to need one! And I've lowered my prices, just for you."

"Mr. Hat: Hark! Whip man! I am prepared to offer you mercy, and a job in my fancy shop to repay your debt. We need only destroy the mirror that binds us here in endless battle! What do you say....friend?"
"Baz: Haw! You think the Baz is gonna work in some stinky ol' hat store? You're outta your mind! I don't wear aprons or sweep floors, 'specially for
the man.
I punch faces, not clocks. And, just sayin, I'm pretty sure after I'm done with you, you won't even remember my debt!" 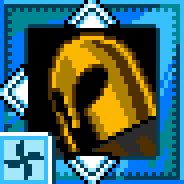 Retrieved from "https://shovelknight.fandom.com/wiki/Mr._Hat?oldid=37572"
Community content is available under CC-BY-SA unless otherwise noted.