Know Thy True Self

Nightmare Reize is the Enchantress's empowered version of Dark Reize and the final boss of Specter of Torment.

Nightmare Reize takes the form of a giant power suit worn by Reize, looking both organic and mechanical and floating above ground. The suit is composed of a dark blue armor and a dark red sash similar to Reize's, covering dark flesh. The armor has a face in the center from which he can spit flames. His long arms are completed with large green claws. One hand is covered by a gauntlet going up to his shoulders with spikes, but he can produce fire from both. Reize's head can be seen on top of the armor, without visible pupils and surrounded by green flames.

After Specter Knight defeats the Enchantress, she calls Dark Reize to her to reveal his perfect self to the felon knight. Despite Specter Knight's attempts to change his mind, Reize agrees to let her change him. The Enchantress then floats Dark Reize into the air and sends pillars of green flames over his body, turning him into Nightmare Reize. The floor then collapses, sending Specter Knight onto rails that are used during the fight.

Nightmare Reize has three main attacks. He can:

The battle takes place on two everlasting rails, with random red lamps. Specter Knight can only grind, which takes away some Curio use. The top rail is usually beneficial for attacking, but the bottom tends to have easier red lamp patterns. 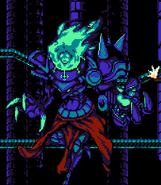 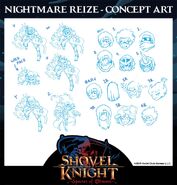 Concept art.
Add a photo to this gallery
Retrieved from "https://shovelknight.fandom.com/wiki/Nightmare_Reize?oldid=35197"
Community content is available under CC-BY-SA unless otherwise noted.