Oolong is a minor character in Plague of Shadows. He admires Team Plague but can only contribute by playing music to pally his lack of fighting skills. Sadly his repertoire is dependent upon his lackluster memory.

Oolong's appearance is of a pale green humanoid creature, with a bulbous body and long slender limbs. His head has a curious funnel like appendage growing out of it, which is how he plays his music.

Oolong can be found at the Potionarium on the far left side of the main hall. Similar to the Bard, he can play scrolls found in Plague of Shadows. Whilst Music Sheets are given to Percy as scrap paper, the ones with writing on both sides are thrown away and land in Oolong's funnel, causing him to remember the song in question.

When throwing a bomb directly in his funnel, he belches explosions to the bomb's powder.

Oolong reappears at the Troupple Pond during the ending, fulfilling his wish of playing for the Troupple King while celebrating the defeat of the Enchantress.

A bookworm Plague Minion can be found at the Crag of Joustus researching Oolong. He gives King Knight Oolong's Joustus card and keeps researching. Oolong can be found by using the Horns of Heralding near the Yoppler to teleport into Oolong's funnel, who's having a headache. Pressing any movement button will force King Knight out of the funnel along with some green liquid. King Knight advises Oolong to stop trying to remember the musics and he does so. The Heirloom can be used again to go back to the Yoppler.

His Joustus card has two double arrows to the right and downwards, and will swap the down arrow for an up arrow after a push, and return it after the next. This is made to mimic his up and down movement when he learns a new song.

When talking to him for the first time:

Asking to play a music:

"Oolong: ...Want to help. Oolong is no good fight. Get dent in head tubes."

"Oolong:
Ohhhhhhh!
My head.. Forgot musics! What Oolong do now?"
"King Knight: Relax, Oolong- A full brain is a sad brain. I never think about anything, and I'm totally happy!"
"Oolong: Unnnh... Head empty.. Serene. Brain tube flow. Is okay. Maybe not so bad... Thank you, Gold Knight. We music together soon, if Oolong remember?" 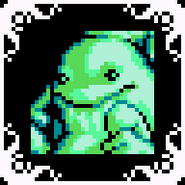 Older version of Oolong's portrait in King of Cards. 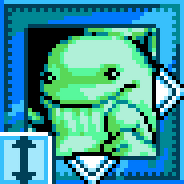 Sprite.
Add a photo to this gallery
Retrieved from "https://shovelknight.fandom.com/wiki/Oolong?oldid=36081"
Community content is available under CC-BY-SA unless otherwise noted.