Generals of the army of the Enchantress (Formerly);
Knights

"Plague Knight: Haha! Might makes right, isn't that the Order's motto? I just took some initiative."

The Order of No Quarter is a villainous group of knights created by the Enchantress in order to assemble an army capable to conquer the Valley, which ended up divided into four quadrants closed by locked gates. In addition to their individual skills in combat, each knight has a specific role in the Order, and loyal minions under their personal employ.

The Enchantress tried to recruit Black Knight and Phantom Striker to the Order as well, but they escaped her grasp. Conversely, Baz tried to join but was refused due to his buffoonish demeanor. Black Knight would later decide of his own accord to protect the Enchantress safety from afar, indirectly contributing to the chaos generated by the Order.

As shown in Specter of Torment, most of its members didn't actually join of their own free will; rather, the Enchantress sent Specter Knight to "persuade" them and if they proved reluctant, beat them into submission. Specter Knight himself was also coerced in his role of enforcer, only agreeing to serve the Enchantress because she promised to make him alive again after he recruited eight knights. Furthermore, he was never treated with any kind of respect, being instead constantly belittled and threatened by her. Then, when she realizes that he was too strong-willed to be bent into submission, she tricked Specter Knight in wasting the power she gave to the Keepsake Locket by targeting Reize, corrupting him into Dark Reize and then transforming him into the monstrous Nightmare Reize. When she treatened to make the youth her 8th Knight, Specter Knight was forced to become a member in his place, and with the locket no longer being able to revive him, Specter Knight was shackled into what seemed eternal servitude.

And so, while not necessarily evil, each knight was forced into aiding the Enchantress in her conquest, although they did receive some benefits for their exploits. For example, King Knight was given his own castle, Pridemoor Keep, usurping its legitimate ruler, while Treasure Knight was given unlimited rights on everything found in the ocean, both above and below it.

However, as seen in Plague of Shadows, the cunning Plague Knight did not join the Order out of fear, but because, unbeknownst to the rest, he was planning on defeating his colleagues and getting their Essences to brew the Ultimate Potion, the most powerful concoction in the world.

Due to their hostile takeover of the Valley, in Shovel of Hope Shovel Knight is forced to dismantle the locked gates by confronting the Order members in their lairs while on his quest to reach the Tower of Fate and discovering what happened to Shield Knight, while Plague Knight initiates his master plan, unknowingly aiding each other in their respective goals.

Ultimately their combined efforts cause the Enchantress to be defeated, reverting back to Shield Knight, and the Tower of Fate collapsing unto itself. With the Order disbanded, the knight returns to their previous activities, although some of them end up suffering some punishment for their actions like King Knight and Treasure Knight. 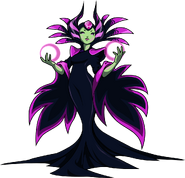 Artwork of the Enchantress, the grim leader of the Order of No Quarter

Artwork of Specter Knight, Enforcer of the Order 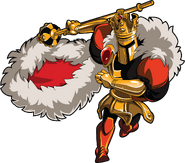 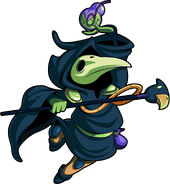 Artwork of Plague Knight, Alchemist of the Order and betrayer of it 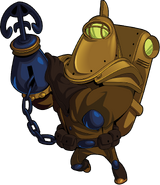 Artwork of Treasure Knight, Financer of the Order 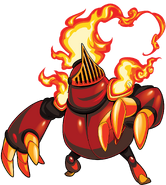 Artwork of Mole Knight, Excavator of the Order 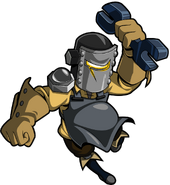 Artwork of Tinker Knight, Engineer of the Order

Artwork of Propeller Knight, Airship Commander of the Order 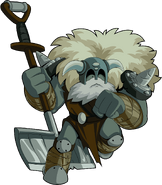 Artwork of Polar Knight, Warrior of the Order

The Order, finally united, bows to the Enchantress, while Specter Knight stands tall, defiant to the end
Add a photo to this gallery
Retrieved from "https://shovelknight.fandom.com/wiki/Order_of_No_Quarter?oldid=37545"
Community content is available under CC-BY-SA unless otherwise noted.