The Swift Kicker
Percy the Scholar is a recurring character in Shovel Knight who studies mainly ballistics, often at the expense of those using his catapults. He is secretly helping Plague Knight in Plague of Shadows, in which he pays for collected Scrap Sheets and assist in the alchemist's arsenal development.

Percy is an anthropomorphic horse much like the Adventurers. He wears a blue tunic with a matching feather hat.

Despite his profession and love for science, Percy is an airhead. His competences are as much hit and miss as he is oblivious of the situation surrounding him or the backhanded insults thrown at him. Despite this, the Scholar is competent enough to manipulate some of the Potionarium's mechanisms, fixing them or even completing Mona's bombs research.

He also imagines himself well-known in love matters. Ironically enough, the Magicist fell in love with him, proving the effectiveness of his love advice.

In Shovel of Hope, Percy, known as Scholar in this campaign, can be found in the Armor Outpost, on top of the Aerial Anvil next to a catapult he aimed at the Village. His calculations are actually correct as his device hits its expected target, unlike his usual mishaps. Another catapult appears later in the Village, aimed in reverse at the Armor Outpost.

In the ending, Percy joins Plague Knight's advanced potion class in the Explodatorium.

In Plague of Shadows, Percy joined Plague Knight's ranks in the Potionarium to conducts his ballistics research, much to the alchemist's dismay. He is however short on paper to write his calculus and pays Plague Knight 500 gold for each Scrap Sheet brought to him. He also rewards him with bad love advice.

Beside his work below the Village, Percy appears outside the Armor Outpost to test out his Catapult. He claims to have calibrated it to reach an unguarded "faraway trove of treasure and armaments", but requires 50 Cipher Coins to order a torsion rod for the device. Once fixed the device instead launches Plague Knight right into the middle of the Armor Outpost, forcing the alchemist to fight his way out through an assaulting squadron of guard knights. He still claims afterward to have fixed his calculations, although the catapult only launches Plague Knight to the Village.

At some point, Percy interrupts Mona's flirting of Plague Knight by fixing the power shortage in the Potionarium by himself. Later on, Percy takes Mona's role in the Potionarium after she left Plague Knight's side due to a misunderstanding regarding the Magicist. From that point onward he both uses Mona's research to develop the alchemist's bomb arsenal, eventually crafting the Pandemonium Chalice with all remaining Cipher Coins, and assists him in crafting the Ultimate Potion.

In the ending, Percy has entered a relationship with the Magicist. They join the Hedge Pupil in managing the Explodatorium, although the place soon becomes even more chaotic.

Atop the Aerial Anvil:

"Scholar: Hm... If I adjust the trajectory, I should be able to target the Village! I simply adore ballistic physics!" 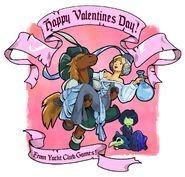 A picture of Percy and the Magicist for Valentine's Day that was posted on Twitter by Yacht Club Games. 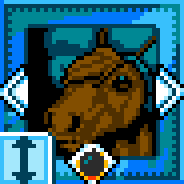 A sprite of Percy's updated model.
Add a photo to this gallery

Retrieved from "https://shovelknight.fandom.com/wiki/Percy?oldid=36646"
Community content is available under CC-BY-SA unless otherwise noted.