Enemies (Shovel of Hope, Plague of Shadows, Specter of Torment, King of Cards)

NPC (Plague of Shadows, Specter of Torment, King of Cards)

Grunts, factotum and test subjects of the Team

Plague of Shadows
Specter of Torment
King of Cards

Plague Minions are jumpy minor enemies in Shovel Knight: Treasure Trove. They throw two bombs at a time to hit their target, but can and can also destroy blocks when they explode. They can be found in the Explodatorium and Tower of Fate: Entrance and Tower of Fate: Ascent. They have three hit points and deal one half a damage point. Upon death they drop 2 red gems both worth 50 gold.

Plague Minions toss their bombs in the air, which makes approaching them without getting hit tricky. They can also rectify the trajectory of their projectiles to hit with more precision their targets. They are particularly dangerous on a floor made of blocks as they can destroy the path and send their targets falling off.

The roles of Plague Minions are greatly expanded in Plague of Shadows. They serve Plague Knight, aiding him in the quest for the Ultimate Potion. They often give gameplay hints, though they are quite goofy and somewhat incompetent. Comically, Plague Knight can blow them up in the Potionarium and other places where they can be spoken to. They are also present at the Armor Outpost after Plague Knight takes it over.

Despite still serving Plague Knight, the Plague Minions and every other enemy found within the Explodatorium, are hostile towards him, having seemingly gone on a strike before being put back into line by the alchemist.

In Specter of Torment, Plague Minions appear at the Tower of Fate after Plague Knight has been recruited by Specter Knight. One of them give a useful tip, but the others hint at Plague Knight's true plan within the Order of No Quarter.

One of the Joustus cards in King of Cards is a Plague Minion card which has 2 Bomb Arrows facing left and up.

Two Minions in the Plains:

"Minion: Uh-oh! The Boss is on his way. We've gotta get back to the lab,
fast!
I don't wanna get
experimented on!
"
"Minion: Just hold [jump] to charge and Bomb Burst out of here! C'mon!
Hurry up!
"

A minion alone at far left side of the Plains:

"Minion: Just hold [jump] to charge and Bomb Burst out of here! Oh! Also be sure to listen when someone is talking! You could miss something important!"

Walking minions at the Potionarium/Armor Outpost:

"Minion: A new bomb combination can make all the difference in a difficult situation."
"Minion: Percy gave me a great love tip. He's a master of romance!"
"Minion: When your magic bar is orange, you'll have a blowout with the next cast! When it's red, you are blown out!"

Walking minions with a bag at the Potionarium/Armor Outpost:

"Minion: I just learned that my Bomb Burst hurts nearby enemies. Now I can fearlessly blast through anything!"
"Minion: Relocating underneath the Village was a genius move, boss! But I miss the Explodatorium..."
"Minion: It's been great offloading all of my work-- I mean, cooperating with Mona! She really knows her stuff!"

Walking minions with spectacles at the Potionarium/Armor Outpost:

"Minion: How many times can you Bomb Burst in the air before touching the ground? It's exhilarating, right?"
"Minion: I always carry a full stock of Health Tonics with me. I quaff a couple at the first sight of danger!"
"Minion: No one knows the Magicist is helping us! She's really risking her neck!"

"Minion: If you fall, try using the Vat Arcana to recover!"
"Minion: You always get all sweaty and stuttery when you're working with Mona. It must be pretty stressful!"
"Minion: Don't worry, boss. I'll keep walking back and forth here, just like you asked!"

"Minion: Sometimes I like to save my second jump until
after
my Bomb Burst. It really helps me stick the landing!"
"Minion: I won't forget our marker for secret areas; Cipher Coins embedded in the walls!"
"Minion: I think I've got it! Powders make explosions, fuses affect timing; and cases change the trajectory!"

"Minion: There's definitely nothing here, Boss. I did my most thorough check! Should we move on?"

Same minion when falling into the pond:

"Minion: Are you OK? I know you have a strict 'no touching' rule, but I had to jump in and save you! Please don't blow me up!"

A large minion at the Forest of Fishing:

"Minion: Wow, there's a bunch of Cipher Coins down these pits! But it's a long way down... If only you could fish 'em up!"

A minion with spectacles at the Bottomless Quarry:

"Minion: Vast riches ahead... but there are too many bottomless pits! If only there were some way to make a platform..."

A minion at the Explodatorium:

"Minion: Aw geez! Plague Knight! Uh, we really messed up! You left us in charge and we failed you!! Everything is going haywire, and there's an intruder afoot...
Watch out
!"

A minion by Percy's catapult outside the Armor Outpost:

A female minion standing at the cleared Armor Outpost:

"Minion: Check out these palatial homes. So this is how the other half lives?"

A minion standing at the cleared Armor Outpost:

"Minion: You think that fancy shop does hoods? I've been thinkin' about having my blast-proofing taken off."

A large minion standing at the cleared Armor Outpost:

"Minion: Wow, where'd everyone run off too?"

A female minion at the Shivering Sprint:

"Minion: This area is filled with traps, boss. Are you fast enough to get by in time?"

A Plague Minion after completing the Explodatorium:

"Minion: The boss won't say much about our latest project, keeps yelling something about essences, who knows?"

A Plague Minion with a bag, after completing the Explodatorium:

"Minion: Don't lose all your gold chasing your dropped bags! Sometimes ya' gotta hold onto the bags ya' got."

A Plague Minion at the banquet hall after completing the Explodatorium:

"Minion: The Explodatorium is definitely our only headquarters, yup! You can always find Plague Knight there. He doesn't ever leave and go anywhere. I really promise!"

A regular Plague Minion at the Cavern of Joustus:

"Minion: I tried to play against that fiery blorb, but he was so combative. I wish he'd find a way to calm down!"

A bookworm Plague Minion standing in the Crag of Joustus:

"Minion: According to my notes, the monster I'm researching is near! He looks like this, have you seen him?"

The same bookworm Plague Minion when spoken to again:

"Minion: "Oolong" is too long to fit in any cage! I must find him, but I can't focus with that music in the distance..."

A regular Plague Minion at the Tower of Joustus:

"Minion: The boss has brilliant schemes, but nothing this diabolical, heh! Bringing down kingdoms with a simple game!" 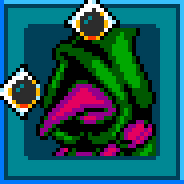 Minions chatting in the Plains.
Add a photo to this gallery

Retrieved from "https://shovelknight.fandom.com/wiki/Plague_Minion?oldid=35505"
Community content is available under CC-BY-SA unless otherwise noted.