Knight
Warrior of the Order

Polar Knight is one of eight Knights of theOrder of No Quarter who serves the Enchantress. A warrior well known for his immense physical strength, he is the boss of the Stranded Ship, and Shovel Knight's old friend/rival, now turned villain.

Polar Knight is a warrior of few words who apparently prefers solitude. He seems to respect strength asking Shovel Knight to join the order out of respect for his power. Conversely he despises weakness and mocks Plague Knight for fighting with tricks and chemistry rather than martial skill. Whether this hatred of weakness extends to Tinker Knight is unknown. Apparently a complete brute, Polar Knight however seems to hide a more complex set of emotions behind his stoic demeanor. According to a Rail Rider at the Tower of Fate, after his defeat against Specter Knight and his forceful addition to the Order, Polar Knight became somber and stormy, shoveling snow with a never seen before vigor, perhaps indicating conflicting feelings. He also gently took care of an injured Terrorpin on behalf of his old friend Black Knight, even hand feeding him some soup while petting him on the head.

In the credits of Plague of Shadows, Polar Knight is seen sharing a campfire with Black Knight in a scene titled 'reunion', implying they also share a past relationship. Whether the two and Shovel Knight were all part of the supposed oath is unknown.

In the credits of Specter of Torment, Polar Knight is seen taking care of injured Terrorpin, the turtle companion of Black Knight.

Polar Knight has two main phases. The first is to dig up snowballs to toss at you, and these will stay until you bounce and break them. He will eventually charge across the screen, piling the snowballs up as he goes. If none of the balls have been broken, this is a fairly damaging attack. The second phase is a lot more difficult, as he will dig up the snow from the floor of the stage, revealing one-hit kill spikes. After a few passes, he will send more snow down to cover the spikes, but this snow damages you as well. As a final note, after one bounce with the Shovel Drop, Polar Knight will hold his shovel above his head, blocking damage and eventually counterattacking through the Shovel Drop.

"Polar Knight: This stuffy keep is no place for warriors, but the meat is plentiful. I may sit here for a while yet."

"Polar Knight: We're close, friends. Fresh meat soon. Then it's time to see if this journey's been worth it."
"King Knight: You there! Are those your dogs?!
I love dogs!
But shouldn't they be on a leash?
"
"Polar Knight: These are Spinwulves, friend, and only a raving fool would disrespect them.."
"King Knight: Ooooh! Cute, and yet fearsome! They are trained for combat, I presume?"
"Polar Knight: Hmph. We train each other. You seem sturdy. How about I give you a little demonstration?"

"Polar Knight: I told them not to leave my Spinwulves alone in the hold. Their breath will melt the hull. We may play Joustus, but I will miss their keen senses." 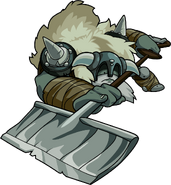 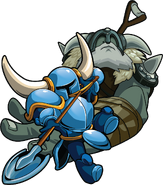 Concept art for Body Swap Polar Knight.
Add a photo to this gallery 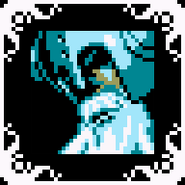 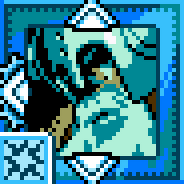 Retrieved from "https://shovelknight.fandom.com/wiki/Polar_Knight?oldid=37576"
Community content is available under CC-BY-SA unless otherwise noted.