Propeller Knight is one of eight Knights of the Order of No Quarter who serve the Enchantress. He is the captain and boss of the Flying Machine, a giant airship.

Propeller Knight has several different attacks. He will fly across the stage, make quick lunges with his sword, use his helmet to launch you into the air (and then attempt to impale you on his rapier on the way down), or try to blow you into the holes at the edge of the stage. After lowering his health, he will call in an airship to attack you. They first launch bombs at you, which he will then try to blow at you. You can knock the bombs into Propeller Knight, doing heavy damage. Upon losing more health, Propeller Knight will command the airship to launch two large cannonballs at the stage, breaking the platform into three segments and making positioning markedly more difficult.

"Plague Knight: They let airheads have airships? Hee hee, ha ha ha! Come down here, I need to borrow something!"
"Propeller Knight: How pedestrian! I was expecting the grand entrance! Substance over style, always with you scientists. So, I heard the most delicious rumor - you envy my suave, daring nature, do you? Get in line!"
"Plague Knight: Haha, don't flatter yourself, flyboy! Your essence is the teensiest part of my plan!"
"Propeller Knight: My essence can't be taken from me! But if you ask nicely, I'd consider giving you flying lessons! Of course, my pernicious pupil...
I'll have to charge!
"

"Propeller Knight: Oh hoh hoh! Such tattered robes! Are you here to join the galley crew, then?
Magnificent!
"
"Specter Knight: On the contrary, you shall join us. An alliance of elite knights will surely compliment your carefree crew. As the captain of the Enchantress's flagship, the skies will belong to your rivals no more."
"Propeller Knight: Rivals? Me?!
Never
! I'll cast you overboard! Hope that your blade is better honed than your
sense of style
.
En garde!
"

"Propeller Knight: Hoh, with the juice selection here, we'll be right at home among the commoners! How quaint! Must I send for my private reserve?"

"Cooper: I knew it! You scoundrel! You lout! You...
Socialite!
The sky isn't yours to own!"
"Propeller Knight:
Ahh,
my red-combed compatriot. How time passes. Tell me now,
why
did you steal my rose?"
"King Knight:
Ohh...
"
"Propeller Knight: And rather than take it yourself, you sent this well-manicured goon in your place? I hate to ruin such fine foes, but I've seen enough!
En garde!
"

"Propeller Knight: Surprised to see me here? You should know, I'm far too charming to be kept away for too long,
ho ho!
A glass of juice, my friend! To flight! To conquest! To Joustus!" 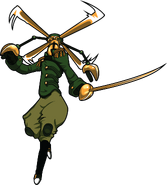 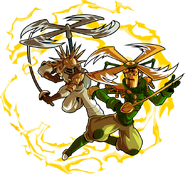 Flying with Phantom Striker.
Add a photo to this gallery

Concept art of Body Swap Propeller Knight.
Add a photo to this gallery 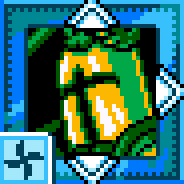 Add a photo to this gallery
Retrieved from "https://shovelknight.fandom.com/wiki/Propeller_Knight?oldid=37583"
Community content is available under CC-BY-SA unless otherwise noted.