Start a Wiki
Rail Riders are minor enemies found only in Specter of Torment. They appear as green archers grinding on their bows. They are usually encountered in the Stranded Ship and in a few challenges but after Polar Knight joined the Order of No Quarter, two of them appear at the Tower of Fate as NPCs.

The first is always found near the 'Edge Farmer, and informs Specter Knight to how to performs tricks while grinding on a rail. The second occasionally wanders the rooms of the Tower, and expresses concern towards his boss Polar Knight, whose attitude had recently changed.

Rail Riders are exclusively found on rails and their only method of attack is to directly collide with Specter Knight. They can be avoided by jumping above them or simply dealt with a single attack.

They are somewhat rare as, excluding challenges, they only appear in the rather short last section of the Stranded Ship. They have one hit point a deal half a damage point, Upon defeat they drop a 5 gold worth blue gem.

One of the Joustus cards in King of Cards is a Rail Rider card which has a Conveyor Arrow facing down.

"Rail Raider: Wanna be cool like me? When leaping from a rail, try pressing [UP] or [DOWN] to pull off some slick stunts!"

Rail Rider wandering at the Tower:

"Rail Rider: Polar Knight has gone somber and stormy since his loss. Never has he shoveled snow with such vigor!"

Rail Rider in the Tower of Joustus: 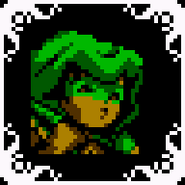 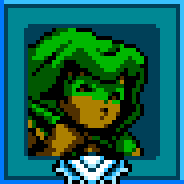 Rail Rider's Joustus card.
Add a photo to this gallery
Retrieved from "https://shovelknight.fandom.com/wiki/Rail_Rider?oldid=35914"
Community content is available under CC-BY-SA unless otherwise noted.