The Raiment of Risk is a Cloak that Specter Knight can buy from Manny for 5000 gold.

With this Cloak equipped, the breakable Checkpoints will show instead of their usual treasure values, a yellow crystal inside. Breaking the Checkpoint while it is in this state will not withhold the treasure normally contained inside, releasing it alongside the crystal.

After picking up the crystal, its effects will activate, decreasing Specter Knight's Will to the default 4 points, but also making the Darkness meter slowly regenerate, without the need of Darkness Jars. Furthermore, while Specter Knight is in the powered-up state, fireballs will be shot at close range with every Slash from his Scythe, tremendously increasing his attack power. The fireballs will not appear if a Dash Slash is performed.

This effect will wear off if Specter Knight is defeated. In this case, the last unbroken checkpoint will show again the same yellow crystal. While the effects of the Cloak are active, breaking more checkpoints will have no additional effects.

The Raiment of Risk can be extremely useful during New Game Plus, as picking up the crystal will reduce the fused "Darkness + Will" meter to a maximum of 80 points (4 bars), but more importantly will make it no longer run out through time (and still regenerates) until the effect wears off.

Raiment of Risk previewed by Manny 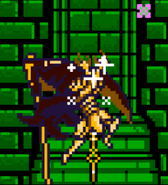 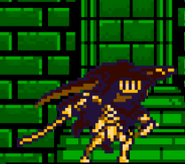 Specter Knight attacking with fireballs
Add a photo to this gallery
Retrieved from "https://shovelknight.fandom.com/wiki/Raiment_of_Risk?oldid=24646"
Community content is available under CC-BY-SA unless otherwise noted.