Ratsploders normally run back and forth, but will jump at the player when he gets too close. They're fairly easy to kill since they only have one hit point, but attacking a Ratsploder will knock it back, causing it to explode on impact with a surface; as such, the player should take care not to try to kill Ratsploders in tight spaces to avoid getting caught in the resulting explosion. However, if a Ratsploder is attacked with a Relic/Arcana/Curio/Heirloom or any of Plague Knight's bombs, it will instantly explode without getting knocked back.

When defeated, they drop a blue gem worth two gold and a Jar.

Propeller Ratsploders appear in King of Cards, seen only in the Explodatorium stages. They behave like Propeller Rats at first, but when attacked they lose their propellers and become normal Ratsploders. 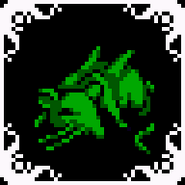 Joustus card portrait.
Add a photo to this gallery
Retrieved from "https://shovelknight.fandom.com/wiki/Ratsploder?oldid=27997"
Community content is available under CC-BY-SA unless otherwise noted.