Tower of Fate (hub)
Red is a character in Specter of Torment. Specter Knight can trade Red Skulls with him in exchange for new Curios. He is also the love interest of Scarlet and collects skulls in order to be reunited with her.

Red is a red skeleton with a black and red outfit, and a hat with a large feather on it.

Red was a Curio hunter in his life, and can locate the ones hidden deep in the chambers of the Tower of Fate. He started collecting Red Skulls to find his bride, Scarlet, with whom he was separated in death. He offers to take Specter Knight to the locations of Curios in exchange for skulls. Once Specter Knight finds Scarlet's skull and delivers to him, Red will conjure her from it to be finally reunited. As thanks, they invite Specter Knight to assist to their wedding ceremony and dance, the latter which they will perform again if Scarlet is spoken to.

After buying all Curios, Red decides to continue collecting all Red Skulls and will reward Specter Knight 500 gold each. He will also lead Specter Knight to the place of his death in the Tower and give him back the Donovan Set and Caltrops. Specter Knight will be thankful, but Red will warn him about attempting anything against the Enchantress.

If Scarlet was resurrected, Red and her get out of the Tower of Fate together as Specter Knight returns from his confrontation with the Enchantress. They reappear later, dancing in a house at the Lich Yard, but stop to observe the undead horde invading the village, driving its living inhabitants out, and Phantom Striker's futile resistance to it. If not, then Red will be alone in that house, holding another Red Skull, and salute the invading army.

In King of Cards, Red appears as one of the players needed to progress in the Tower of Joustus. He can be found by going to the chest to the left of Missy, then falling down into the first hole to the right. He owns the Red, Scarlet, and Gall cards.

"Red: My beloved, my betrothed! My heart breaks, for her crimson skull lies misplaced.
Oh, to see her crimson face once more!
If you should happen upon a Red Skull, even a hundred of them, then
I beg you! Please!
Bring them all to me. In a past life I hunted Curios, but I'd trade them all away just to see my love again. Surely these would interest you?"

When Specter Knight doesn't have enough Red Skulls for a Curio:

"Red: You'll need to bring me more Red Skulls for that one."

When choosing a Curios to find:

"Red:
Ah!
This Curio is well guarded! While I can lead you there, you'll have to battle your way out!"

When entering a Curio stage with a curse:

"Red: It would seem that a curse has been placed here. I'm afraid your scythe will be of no use. Why is that, you ask?
Sorry
, but that's an ancient skeleton secret. We'll regroup ahead.
Tread carefully!
"

When entering a Curio stage without a curse:

"Red:
Oh!
It appears that this room isn't cursed. You might be wondering why that is... I'm sorry, but that's
another
ancient skeleton secret. Now,
make haste!
"

When completing a Curio stage:

and going back to the hub:

When entering a new Curio stage with a curse:

"Red: This area is cursed as well. Tread carefully!"

When returning to Red and Curio stages are available:

"Red: My heart grows cold... I have located new Curios, but have you found any Red Skulls?"

When there is no new Curios available:

"Red: Alas, I am still hunting for new Curios to trade. I suppose you have important work to do, but please.. don't forget us!"

When bringing Red skulls but all Curios have been acquired:

"Red: Yes! I've been searching an eternity! My sweet Scarlet.
I'll never let you go again!
My heart soars with joy! This calls for a celebration! Join us in the ballroom, Specter Knight!"

"Red: You have our deepest thanks, Specter Knight.I hope you enjoyed the show!"

If there are still Red Skulls to be brought to Red:

"Red: I'll find a way to repay you! Until then, please bring me more Red Skulls. Perhaps we could collect them all?"

After bringing the last Red Skulls:

"Red:
Haha
, that's the last one! Well done! As thanks, I've prepared a little surprise. Follow me once more into the Tower depths!"[At the Tower dephts]
"Red: Would you look at this rubble! What possibly could have happened here?"

[After giving the Donovan Set]

"Red: Impeccable, isn't it? Really, it's like it was made just for you!"

"Red: I found these alongside it. Not quite magical enough for my tastes. Hardly worthy of being called a Curio."

"Red: The pleasure is all mine. Both of us might be a touch too sentimental for undead life,
ha ha...
"
[Red walks away]
"Red: I don't know what you've been plotting against the Enchantress, but be careful, Specter Knight."

If talked to again after getting all Red Skulls:

"Red: Stay safe out there, Specter Knight... My friend."

"Red: My loved, my betrothed! My heart breaks, for her Red Skull lies misplaced!"

"King Knight: Look, people misplace things all the time. It's not
my
fault. Can we play Joustus or what?"

"Red: My heart grows cold.. But shall we play cards to pass the time?" 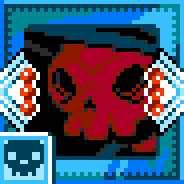 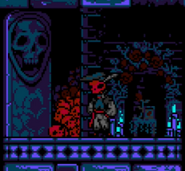 Red in-game.
Add a photo to this gallery
Retrieved from "https://shovelknight.fandom.com/wiki/Red?oldid=32574"
Community content is available under CC-BY-SA unless otherwise noted.