Incompleto Sin Ti
Scarlet is a character in Specter of Torment encountered in the Tower of Fate. She is the lost love of Red, who is desperately collecting Red Skulls in order to find hers.

Scarlet and Red were separated in death before their wedding, her red skull lost while Red was resurrected. Her lover then starts a desperate quest and sends Specter Knight to find it among the others scattered throughout the Valley. Once her skull is found and delivered to Red, he will conjure her from it to be finally reunited. As thanks, they invite Specter Knight to assist to their wedding ceremony and dance, the latter which they will perform again if Scarlet is spoken to.

If she has been found, Red and Scarlet get out of the Tower of Fate together as Specter Knight returns from his confrontation with the Enchantress. They reappear later, dancing in a house at the Lich Yard, but stop to observe the undead horde invading the village, driving its living inhabitants out, and Phantom Striker's futile resistance to it.

After Red finds her skull:

"Red: Yes! I've been searching an eternity! My sweet Scarlet.
I'll never let you go again!
My heart soars with joy! This calls for a celebration! Join us in the ballroom, Specter Knight!"

When talked to after the dance:

"Scarlet: I really can't thank you enough for reuniting us. The power of love reaches beyond the grave! Would you like to celebrate with us once more?"

"Scarlet: Perhaps another time, then!"

"Scarlet: Wonderful, follow us!"
"Scarlet: Ah, I love a good dance! Well, I suppose we should return." 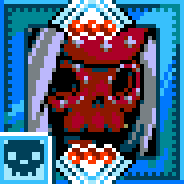 Scarlet standing next to Red in-game.
Add a photo to this gallery
Retrieved from "https://shovelknight.fandom.com/wiki/Scarlet?oldid=31399"
Community content is available under CC-BY-SA unless otherwise noted.