Serprize are catfish-like minor enemies in Shovel Knight: Treasure Trove. Their name is a pun of surprise.

They start out invisible but fade into view and attack when the player draws near. In Specter of Torment, some of them may appear out of water. In this case they will erratically flop around like a common fish. They posses two hit points and deal half a damage point. Upon defeat they drop a 10 gold worth green gem and one Jar. 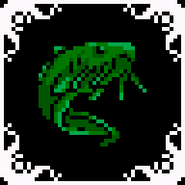 Joustus card portrait.
Add a photo to this gallery
Retrieved from "https://shovelknight.fandom.com/wiki/Serprize?oldid=24895"
Community content is available under CC-BY-SA unless otherwise noted.