Memory of Conflict (Specter of Torment)

Shield Knight is one of the main characters of Shovel Knight: Treasure Trove and one of many Knights that inhabit its world. She is Shovel Knight's partner and love interest.

Shield Knight was a noble and daring wandering knight, travelling across the Valley together with her partner Shovel Knight. They were also close friends with the brash but well intended Black Knight, who began to hold strong feelings towards Shield Knight.

Eventually Shield Knight and Shovel Knight heard the tales of the dark powers of the cursed amulet held in the Tower of Fate, and decided to destroy it for good. But concurrently another group, composed of the rogues Luan and Donovan, sought to claim the artifact for themselves, in hopes to protect Luan’s son from his own recklessness.

The two groups reached the amulet resting chamber at the same time, with Luan and Donovan meeting face to face with Shield Knight, who had apparently run ahead of her companion. Shield Knight tried to dissuade the two men from their purposes, but Donovan, full of mistrust and contempt towards knights (and perhaps partially brainwashed by the amulet's dark influence), refused to heed her warnings, engaging in a vicious clash with her. The skirmish compromised the stability of the room, resulting in the floor caving in and plummeting both Luan and Donovan to their deaths into the dark abyss below. Due to this, Donovan began harboring a deep grudge against her, blaming her for his misfortunes.

Left alone in the room with the cursed amulet, Shield Knight, possibly weakened by her fight with Donovan, was overwhelmed by its powers. Her personality became twisted and warped by the evil magic, transforming her into a dark witch known as The Enchantress. This metamorphosis apparently also caused Shovel Knight to pass out and, while unconscious, be somehow expelled from the Tower, whether by the amulet, an unknown third party, or The Enchantress herself.

Shield Knight, still dwelling inside the witch but powerless to stop her, was held hostage within her own body while the dark witch began her plans of conquest. Withdrawn in the innermost parts of the Tower, she was biding her time in wait of the completion of her armies.

Meanwhile, Shovel Knight, once he recovered his senses, tried to re-enter the Tower, but found the way sealed and completely impenetrable. Assuming the worst for his beloved companion, Shovel Knight was stricken with overwhelming grief and decided to retire to a life of solitude. This exacerbated his rivalry with Black Knight, who saw him as a coward who was unable to protect Shield Knight.

While Shield Knight does not make a direct appearance or get a direct mention in King of Cards, her helmet can be seen in the background of what is presumably the private chambers of The Enchantress in the Shrouded Spires part of the Tower of Fate, where also the witch's own Joustus card can be found.

Eventually, Black Knight began searching for Shield Knight, which led him inside the Tower of Fate. There, he met The Enchantress, instantly recognizing Shield Knight behind her new appearance. Unfortunately, the reveal of her true identity pushed Donovan, now transformed by The Enchantress into the grim Specter Knight, into an unstoppable rage. As such, he swore vengeance in retaliation to the abuse he suffered under her hand.

Black Knight tried to reason with him out of concern for both his old friend and Shield Knight, but Specter Knight defeated him, continuing his voyage across the innermost parts of the Tower.

However something nobody could have predicted suddenly occurred: the allies that Specter Knight made while performing his task, specifically the skeleton Red, Manny, Missy, the old Horace and the now free Dark Acolyte, had decided to rebel against their dark mistress and aid their friend. Thinking that they could trap the Enchantress inside of it, as soon as the revenant left to confront the witch, the group hastily began modifying with additional magic and technology the teleporting mirror that Specter Knight had used until then to move across the valley, the Mirror of Fate.

Unfortunatly the rushed job had instead terrible consequences, as the Mirror went haywire and sprang to life as a monstruosity, trapping not only its original target, but also its creators, Specter Knight himself, and various other individuals, suddently kidnapping them from all across the Valley. The only way for these individuals to return to the real world was for each of them to traverse the illusory landscape, battle the Mirror's illusions and each other then shatter one of the various copies of the Mirror of Fate itself. Only then the individual would be returned not only to whence they came but also just a few moments later, not unlike the imprisonment never happened at all.

The Shield Knight still lingering inside The Enchantress was separated from her corrupted self, and awakened in the Colosseum questioning if that could have been an opportunity to flee her nightmarish imprisonment before being distracted by approaching foes. Shield Knight met up with her evil half, The Enchantress, although initially she couldn't quite comprehend what was before her and where she had seen her before, not clearly remembering what happened at the Tower of Fate. The Enchantress, taunting her for her lack of understanding, on the other hand saw this as an opportunity to get rid of the last remnants of her good side once and for all and ferociously attacked, but luckily Shield Knight was able to prevail and proceed. While proceeding Shield Knight had a chance encounter with Shovel Knight; however her partner, completly crushed by his constant nightmares about her apparent demise and assuming to the whole situation to be yet another unrestful dream, refused to listen to Shield Knight claims to be the genuine article and heed her warning of an evil force behind the kidnapping of their friends and foes, attacking her in an attempt to vanquish the supposed vile apparition and forcing the warrior maiden to defend herself in a match and retreat.

Reaching the Mirror's chambers after a series of battles with the illusions of the Mirror, Shield Knight meeted once again with Shovel Knight, who after witnessing the way she fought and his encounters with Polar Knight, had finally understood to not being in a dream and having the real Shield Knight before him. Apologizing to each other, the two of them vowed to find a way to exit and reunite with one another, but unfortunatly Shield Knight informed Shovel Knight that during her battles, she had come to learn that in order to attract the Mirror of Fate so that it could be shattered, the two of them had to first battle one another. Although Shovel Knight expressed deep concern about the possibility of not emerging out of the mirror together, Shield Knight reassured him that, should that being the case, they both knew where to start looking; with her heartfelt encouragement the two started the battle, with Shovel Knight emerging victorius.

After that, Shield Knight once again crossed paths with the Enchantress, still intended to snuff her out and keep her away from the Mirror. Finally undestanding the true nature of her foe, Shield Knight demanded her freedom, which the witch denied, taunting her that no freedom awaited her even outside the Mirror. Steeling herself to go through whoever stood in her way to freedom, Shield Knight confronted her foe and then the Mirror of Fate, prevailing in both battles.

Sadly The Enchantress's prediction turned out to be true and Shield Knight, now fully aware, found herself once again trapped inside the sorceress, watching through her eyes but unable to act. Knowing that Shovel Knight wouldn't give up, she grit her teeth and vowed to continue fighting until the bitter end.

The end of Specter Knight's rebellion[]

Freshly returned from his own imprisonment in the mirror, Specter Knight swiftly reasumed his way towards the Enchantress's private chambers and directly confronted her Enchantress, but it only lead to ruinous consequences for the undead warrior.

Black Knight, intimidated by her overwhelming powers, resolved to protect The Enchantress from afar, while hoping that Shield Knight would being able to remove the darkness binding her soul.

Due to her conquest of the Valley, The Enchantress started whispers among the people that the Tower of Fate had unsealed itself. This, united with his encounter with Shield Knight inside the mirror, sparked an unwavering hope in Shovel Knight to discover what really happened to her and reunite with her at last. He met obstruction from both the Enchantress’s Order of No Quarter and Black Knight, who blamed the burrower for failing to save Shield Knight. He was also fighting against his own feelings of guilt, every night still plagued by nightmares of trying of save Shield Knight but being unable to properly reach her.

Shovel Knight and Shield Knight shared a tender reunion. But unfortunately it was cut short, because despite the end of the Enchantress as an individual, her raw strength and magic recombined, condensing themselves in the monstrous Remnant of Fate, an abomination moved only by a desire of total destruction.

Thanks to the efforts of Shovel Knight, Shield Knight, and the crumbling of the Tower initiated by Plague Knight sacrificing the Ultimate Potion, the Remnant of Fate was stopped, but with its remaining strength it injured Shovel Knight, forcing Shield Knight to stay behind to block this last powerful attack while Black Knight took him to safety.

Glad to have had the opportunity to see her two friends one last time, Shield Knight was prepared to perish under the rubble of the Tower or be torn apart by the Remnant‘s magic. But against all odds, she survived. Injured but alive, a limping Shield Knight rejoined with an unconscious Shovel Knight, and not wanting to interrupt his sleep, leaned beside him, falling peacefully asleep.

Shield Knight is set to appear in Shovel Knight Pocket Dungeon, trapped inside the eponymous contraption alongside many other individuals, including Shovel Knight himself.

In battle, Shield Knight will run back and forth across the arena, using her large shield to block any frontal attacks as she rushes forward. She's capable of throwing her shield, which will return back to her shortly after it's thrown, but it leaves her wide open while the shield is away from her. Also, Shield Knight will perform a shield bash in which she charges forward shield first, and if she rams into either of the walls, it will cause a row of blocks from the ceiling to fall, possibly dealing damage if Donovan fails to avoid it. During the shield bash she also become immune to the Caltrops. Eventually, as her health reaches a low point, Shield Knight will also throw her smaller shield, which will bounce around the arena in a random pattern. 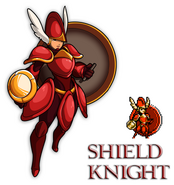 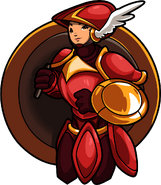 Another artwork of Shield Knight. 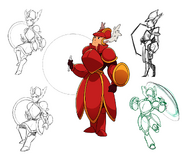 Concept art of Shield Knight without her helmet. 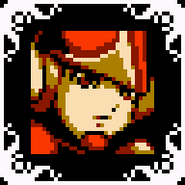 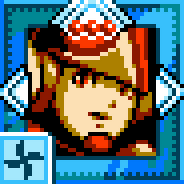 Shield Knight when using her to reach the normal ending.