Shovel Knight: Plague of Shadows is the second campaign of Shovel Knight and a parallel story to Shovel of Hope. It stars the mad alchemist Plague Knight in his quest to craft the Ultimate Potion from the Essences of his fellow knights of the Order of No Quarter. The campaign adds new related Feats and initially introduced Challenge Mode for both Shovel Knight and Plague Knight.

Plague of Shadows was released on September 17, 2015 as a free expansion to Shovel Knight. It is currently only playable in Shovel Knight: Treasure Trove.

Major Differences from Shovel of HopeEdit

The story is set parallel to Shovel of Hope, revealing Plague Knight's ulterior motives on joining the Order of No Quarter.

Although for the most part Plague of Shadows' story occurs at about the same time from Shovel of Hope, there are some minor differences between the two tales. This is due to the stories being told respectively from Plague Knight's and Shovel Knight's perspectives. Some of these differences are related to the player's choices during Shovel of Hope (i.e. helping the members of The Order of No Quarter after the Battle Royale, reentering the Village and Armor Outpost again after their initial visit).

Plot of Plague of Shadows Edit

Plague Knight clears his way through the plains, defeating all foes in his path. He then sees Black Knight who is trying to dissuade Magicist from helping Plague Knight with his research on the Ultimate Potion, but Magicist pretends to know nothing about it and leaves when she hears someone coming. Plague Knight meets up with Black Knight and defeats him. The Black Knight then flees defeated.

When Plague Knight first arrives at the Village Farrels warns him that he cannot enter the village with a weapon. He then recognizes the knight and forbids him entry, so Plague Knight is forced to use the secret entrance from Hedge Pupil's house to reach Mona's room. There he informs her about the Black Knight situation but she isn't bothered at all. She pulls the lever and both of them are transported to their hideout, Potionarium. After some last minute information about the essences from Mona, he then leaves to collect them.

Plague Knight ventured to Pridemoor Keep and The Lich Yard and defeated both King Knight and Specter Knight, taking their essences in the process.

After this he returns to the Potionarium to see Mona dancing by herself. They then talk a bit and Plague Knight decides to get dancing lessons. She also gives him a health potion.

Plague Knight pressed on further into the Valley and visited the Iron Whale and the Lost City, defeating Treasure Knight and Mole Knight and took their essences. He also visited the Explodatorium, which was in uproar due to rebellion of his workers. One of his loyal minions also informed him that a intruder was seen inside the facility. This intruder was later revealed to be Shovel Knight. They battle and Plague Knight is victorious, only for Shovel Knight to attack him from behind and taking his essence back. Plague Knight then goes to Shovel Knight's campsite and takes his essence out of his backpack.

After defeating all three he returned to the Potionarium. When the last essence was studied, the lever jammed, so Mona wanted Plague Knight's help of unjamming it. But before they could touch hands, the power is cut off and then on again and Percy (one of the Plague Knight's companions) informs them that he fixed the power. They then talk like nothing happened and she gives him another health potion.

When Plague Knight visited the Armor Outpost, he found Percy working on the catapult. After assisting him, Plague Knight used the catapult and landed in the middle of the Outpost. There a group of knights attacked him. He defeated them all and witnessed the Aerial Anvil flying off. He then declared that Armor Outpost is his. He then went to Mr. Hat's shop, who was quite angry that all his customers were scared off, so he attacked. After being defeated Mr. Hat apologized and fled. Plague Knight then bought a chalice from Troupple Acolyte and went to Troupple Pond, where Troupple King taught him how to dance.

Plague Knight also visited the Hall of Champions. The head guard in front pretended to not recognize him, so Plague Knight went inside. There he was ambushed by the group of Knights. After defeating all of them, head guard called a surrender. He then stroke a deal with Plague Knight that anytime he visits, he can help other knights with their training. For the reward of course.

In the third area Shovel Knight ventured to the Clockwork Tower, the Stranded Ship, and the Flying Machine, defeating Tinker Knight, Polar Knight, and Propeller Knight, taking their essences in the process.

Plague Knight then went to other two areas and took the corresponding essences. He then returned to the Potionarium but Mona still wasn't present, but she left behind a last health potion. Plague Knight and Percy then almost completed the Ultimate Potion, with Plague Knight taking it to the Tower of Fate.

At last Plague Knight entered the ramparts of the Tower of Fate. After navigating them for a while he encountered Black Knight once more. Plague Knight asked him why he was talking with Mona and after getting the answer, he attacked Black Knight. They battled again but Plague Knight came out victorious for the third time. Black Knight noticed the knight's love for Mona, but didn't understand why he needs the Ultimate Potion. Plague Knights explains that if he uses it, Mona will love him, but Black Knight tells him she already does. He doesn't believe him and goes inside the tower.

From the Village many villagers are seen watching the Tower of Fate. As the tower starts to crumble the villagers start rejoicing.

The Deposed King decides to knight Plague Knight, while King Knight continues to clean the floors of Pridemoor Keep. When Plague Knight is knighted he starts to jump up and down excitedly and bumps the Deposed King's crown off of his head.

Specter Knight is seen desperately searching the chest where Plague Knight found the Phase Locket. He is very aggravated by its absence, lifts the chest telekinetically and slices it in half with his scythe. This plot element would later be explored in great detail in Specter of Torment.

Plague Minions are seen leaving the Iron Whale with sacks of gold as Plague Knight throws a Bait Bomb towards Treasure Knight who is sitting in the corner.

Percy and The Magicist are watching the Hedge Pupil launching Plague Minions out of a catapult. Percy gets close to the Magicist as a heart forms around their heads.

Mole Knight can be seen making Slimulacras with Plague Knight and Mona.

Liquid Samurais are seen rushing. Shovel Knight takes them all down and sees Baz, Reize, Mr. Hat and Phantom Striker. He then proceeds to raise his shovel while the others strike their battle poses.

Polar Knight and Black Knight are seen together by a campfire.

Plague Knight and Mona go on a date on the Flying Machine, with Propeller Knight as the waiter.

Plague Knight and Mona are seen dancing in the entrance of the Potionarium. 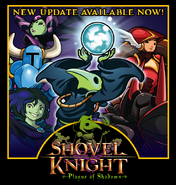 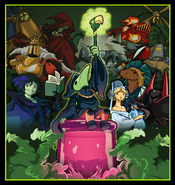 Mona and Plague Knight (image different from final version).
Add a photo to this gallery

3DS and WiiU second screen when starting a stage.

3DS and WiiU second screen when navigating on the map.

3DS and WiiU second screen for the character select menu.

Title screen on the 3DS and WiiU second screen. 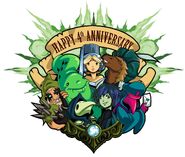 Shovel Knight Plague of Shadows Trailer!
Add a photo to this gallery
Retrieved from "https://shovelknight.fandom.com/wiki/Shovel_Knight:_Plague_of_Shadows?oldid=36091"
Community content is available under CC-BY-SA unless otherwise noted.