Edit
watch 01:54
Arcane: League of Legends - The Loop
Do you like this video?
Play Sound

Shovel Knight: Shovel of Hope is the original campaign of Shovel Knight. The campaign was originally named just Shovel Knight, but was renamed after the release of Treasure Trove. This main story features Shovel Knight on his quest to rescue his lost partner Shield Knight from the Tower of Fate. To do so, he must defeat the Enchantress, protected by her Order of No Quarter. The story runs parallel to the events of Plague of Shadows, and it is preceded by the events of Specter of Torment and King of Cards, which combined act as a massive prequel.

Shovel of Hope has a relatively simpler gameplay compared to the other campaigns. Shovel Knight can use his Shovel Blade to slash at or bounce off enemies, dig piles and destroy obstacles. He can use Relics bought from Chester as a secondary weapon consuming Magic. He can also upgrade his Shovel Blade and Armor at hubs for new effects as well as his own Health and Magic Capacity. Music Sheets can also be collected throughout the stages to listen to the game's music played by the Bard.

Stages throughout the Valley can be accessed through a map divided in four quadrants. Each quadrant features 3 main stages, with at least one boss at the end of each. Completing main stages is required to access the next quadrant. In addition, there are hubs like the Village and Armor Outpost where upgrades and Relics can be bought. There are also optional stages and encounters to collect more Treasures.

The Order of No Quarter[]

When resting at a campfire Shovel Knight suffers a nightmare about Shield Knight falling with him trying to catch her.

When Shovel Knight first arrives at the Village, Farrels warns him that he cannot enter the village with a weapon. However upon seeing the Shovel Blade he laughs it off and allows Shovel Knight to walk freely through the village.

Shovel Knight ventured to Pridemoor Keep and The Lich Yard and defeated both King Knight and Specter Knight.

After this he suffered another nightmare about Shield Knight falling. This time enemies were attacking him as he tried to catch her.

Shovel Knight pressed on further into the Valley and visited the Explodatorium, the Iron Whale and the Lost City, defeating Plague Knight, Treasure Knight and Mole Knight.

After defeating all three he suffered another nightmare about Shield Knight, only this time with more enemies in the nightmare.

Shovel Knight encountered Reize who had heard of a Shovel wielding knight terrorizing the villagers and attacked Shovel Knight believing it to be him. Shovel Knight defeated Reize and assured him that he had not done so. Shovel Knight and Reize parted on good terms.

Shovel Knight also encountered Baz who was angry at being rejected from the Order of No Quarter. Believing he would earn a Knighthood if he defeated Shovel Knight, Baz attacked him. After being defeated Baz threw a temper tantrum hitting the ground whilst sobbing.

When Shovel Knight visited the Armor Outpost he paid for the customers in the hat shop which caused Mr. Hat to go into a frenzy, seeking to take Shovel Knight's helmet. After being defeated Mr. Hat apologized profusely and fled. However Shovel Knight caught up to him repeatedly with Mr Hat giving him money each time he did.

In the third area Shovel Knight ventured to the Clockwork Tower, the Stranded Ship and the Flying Machine, defeating Tinker Knight, Polar Knight and Propeller Knight.

He suffered yet another nightmare about Shield Knight afterwards. This time with even more enemies.

The Tower of Fate[]

After climbing further up the Tower of Fate Shovel Knight ended up landing in the middle of a feast the Order of No Quarter were having. They each fought him in turn but even between themselves they could not win. The Order was left hanging and King Knight pleaded with Shovel Knight to help them up, which is an optional action. After he helps them up, the Order members give Shovel Knight praises and wish him luck.

From the Village many villagers are seen watching the Tower of Fate. As the tower starts to crumble the villagers start rejoicing.

The Deposed King is seen sitting on his throne with the hat shop customers in the throne room. King Knight is seen cleaning the floors. In a moment of anger King Knight throws his rag at the ground and shakes his fist.

The Troupple King is seen dancing as is the Dancer. The male Troupple Acolyte is also cheering.

The Lich Yard - Specter Knight - The life of the party[]

Specter Knight is playing a game wherein he tries to keep a potion in the air by hitting it with his scythe whilst Mona and Grandma Swamp watch. He eventually misses and Mona writes something down.

Villagers are seen leaving the Iron Whale with sacks of gold. As a fisherman leaves he flicks a single gold coin toward Treasure Knight who is sitting in the corner, looking defeated.

Plague Knight seemingly transforms The Alchemeister into a woman resembling the Magicist who is also present. The Goatician and the Scholar look on.

Mole Knight is seen leading a small party through an expedition of the Lost City.

A swarm of Liquid Samurai are seen approaching the four Wandering Travellers who ready themselves for battle.

Propeller Knight makes a small swish of his sword which makes a group of onlookers including Mary Sweets and Molly swoon.

The Armorer and Shovel Smith work at their anvils whilst Tinker Knight makes a miniature Tinker Tank that the Hoop Kid and Playing Kid chase after. Tinker Knight tries to chase after it too but trips up.

Polar Knight is seen staring off into the distance, his helmet on the ground, facing away from the player's screen.

Black Knight is seen resting the unconscious Shovel Knight against the log whilst noting that he kept his promise to Shield Knight. He wishes Shovel Knight good rest and then leaves.

Sometime after, Shield Knight appears at the campsite, her larger shield missing and clutching one of her arms. She lies beside Shovel Knight and falls asleep.

3DS and WiiU second screen for the character select menu.

3DS and WiiU second screen when starting a stage.

3DS and WiiU second screen when navigating on the map.

Title screen on the 3DS and WiiU second screen. 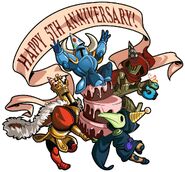