Edit
watch 01:54
Arcane: League of Legends - The Loop
Do you like this video?
Play Sound

STUB
This article has insufficient information.
Feel free to assist the Shovel Knight Wiki by expanding it!

Puzzle, Dungeon Crawler
Shovel Knight Pocket Dungeon is an upcoming 2D puzzle game and new entry of the Shovel Knight series in collaborative development by Yacht Club Games and Vine. Its gameplay and graphical designs are based on Puzzle Knights Deluxe, a game Vine was developing and a remake of Puzzle Knights. Yacht Club Games has already announced their intention to release, post-launch, an expansive slate of DLC for Pocket Dungeon.

Shovel Knight Pocket Dungeon has its own world map and stages called Dungeons. Each Dungeon presents itself as a 8 by 8 grid being slowly filled from the top with enemies, obstacles, potions and objects from the top. The longer the player character survives the Dungeon, the more Treasure Chests they can obtain, and eventually reach the exit. As they progress through the Dungeons, more items and relics are randomly acquired, usually by purchasing, increasing their strength in various ways. Dying inside a Dungeon however results in losing all items, relics, and progress towards the end of the Pocket Dungeon, but lets the player character keep their gems and new recruited people. The gems can then be used at the homebase campsite to buy upgrades, such as fast travel points from Percy or new possible items and relics to appear in dungeons from Chester. The game's Dungeons are: 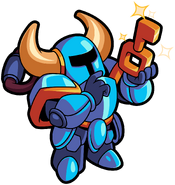 Artwork of Puzzle Knight, Chester, and Shovel Knight on a Big Bohto caravan. 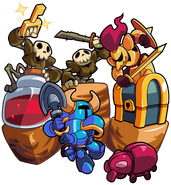 Artwork of Shovel Knight fighting various monsters with no ground. 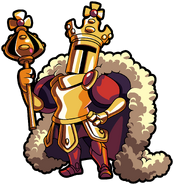