The mode was officially revealed on August 28th on the IGN website and YouTube channel,[1][2] as well as on Yacht Club Games' website.[3] It was officially released to the public worldwide on December 10th, 2019.

Shovel Knight Showdown is a platforming fighting game with 20 characters from the Shovel Knight series. There can be up to 4 players (normally) in matches, and there are a variety of modes to choose from. All 4 playable characters (Shovel Knight, Plague Knight, Specter Knight, and King Knight) have the move set from their campaigns translated into Showdown. Other characters get their own new move set, usually catering specifically for Showdown. There is also a unique parry move, where you can block incoming attacks.

When Specter Knight parted for his final confrontation with the Enchantress in Specter of Torment, the various residents of the Tower of Fate who he made allies with decided to aid in his quest. They hastily modified the Magic Mirror Specter Knight had previously used to teleport across the Valley while recruiting members for the Order of No Quarter, hoping to capture the Enchantress within it. However, the rushed and incomplete job yielded unforeseen consequences...

Each character has a different story (Some character stories intertwine with each other, for example, Mona's and the Liquid Samurai's story). All characters have different adventures but in the end, each one destroys a separate version of the monstrous Mirror of Fate and are ejected back into the real world, where they experience their ending.

Plague Knight: Plague Knight awakens in the Colosseum, blaming a localized time distortion as the cause. He then ventures forward as enemies appear. He then encounters Mona, who is in no rush of escaping due to all of the research she can obtain, being particularly interested in a Liquid Samurai. They team up but they get separated shortly afterward. They encounter each other again sometime later. They must fight in order for the mirror to show up. Plague Knight is reluctant at first, but Mona is not. After battling the Mirror of Fate, Plague Knight inserts the Liquid Samurai Mona captured inside the same containment unit used in Plague of Shadows, making breakthroughs in his Essence research and triggering the events of Plague of Shadows.

King Knight: King Knight awakens in the Colosseum, thinking someone summoned him there to usurp his throne. He then ventures forward, battling anyone in his way. He then encounters Specter Knight, who is extremely annoyed that he is trapped with King Knight. After battling, they encounter each other again, with Specter Knight vowing to escape and find a way to trap King Knight inside the mirror. After King Knight's escape, he wakes up back at Pridemoor Keep on his throne. He dismisses his experience as a dream caused by eating too many leftovers from another gala nobody attended.

Shield Knight: Shield Knight awakens in the Colosseum, being happy that she finally has a chance to escape the spell of the amulet, even if she has to battle anyone who gets in her way. She encounters the Enchantress, who apparently split from her once inside the mirror. Due to almost recognizing her and having something to do with her battle at the Tower of Fate, she battles the Enchantress for her freedom. Later they encounter each other again, and with determination to escape, she battles the Enchantress again. After seemingly becoming free from the mirror, she finds herself still trapped within the Enchantress, hoping for someone to rescue her.

Black Knight: Black Knight awakens in the Colosseum, still sad from the apparent death of Terrorpin. His sadness turns into a shock as intruders approach. Later, he encounters Polar Knight and the knights are glad to see each other. However, Polar Knight dismisses Black Knight's wishes for aid to free Shield Knight and wants to see what the Enchantress sees in Black Knight. Once they cross paths again, Black Knight wonders out loud why Polar Knight is refusing to help, but attacks him after Polar Knight insults his inability to protect his friends. After their battle and the fight with the Mirror, Black Knight returns to the Plains and vows to find a way to save everyone.

Mole Knight: Mole Knight awakens in the Colosseum, thinking he tunneled in the wrong direction. He later encounters Treasure Knight, in which they both agree to team up due to the change in the environment. But soon after, they get separated. Once they encounter each other again, Treasure Knight betrays Mole Knight moments before Mole Knight could betray Treasure Knight. After the defeat of the mirror, Mole Knight and Treasure Knight decided to go their separate ways, leaving the other free to plunder their turf, at least for now.

Treasure Knight: Treasure Knight awakens in the Colosseum, blaming a mutiny or his ship capsizing as possible causes. He then encounters Propeller Knight, in which they have a bet to see how much money they can get, while temporarily teaming up. When they encounter each other again, they realize they are tied, so as a tie-breaker, they would battle. After the mirror takes Treasure Knight back to the Iron Whale, Propeller Knight honors Treasure Knight's win and gives his earnings willingly (75000 gold to be exact).

Baz: Baz awakens in the Colosseum, confused about what just happened. Regardless, he decided to venture forward. On his way, he encountered Mr. Hat. At first, he was impressed by his helmet, but then things turned sour quickly as Mr. Hat recognized Baz due to his armor, which Baz stole from his shop. Mr. Hat then attacks him. Later they encounter each other again, with Mr. Hat offering mercy and a job for Baz if he repays his debt to him. Baz refuses and attacks. He then destroys the Mirror. Baz is later seen inside Mr. Hat's shop, sweeping. At last, his debt was repaid and he was ready to join whoever would need him because as Baz says - it's good to be part of something.

Reize: Reize awakens in the Colosseum, confused. He also vaguely remembers fighting in someone else's body. Regardless, he had to defend himself as enemies approached him. He later encountered Baz and was impressed by him. But Baz was having a bad day and told Reize to leave. Reize instead insisted that Baz would teach him. They teamed up afterwards but get separated shortly after. When they encountered each other again, Baz sadly informed Reize that they must fight. Reize reluctantly agreed and they battled. Reize then destroyed the Mirror. Reize thought he was free, but soon after the darkness surrounded him and he realized he was still trapped inside Dark Reize.

Mr. Hat: Mr. Hat awakens in the Colosseum, not particularly caring about the situation. He had two goals - to find new hats and new customers. He encounters Goldarmor, who wants to arrest him, since Mr. Hat is known for pilfering hats. Mr. Hat is delighted that someone recognized him and the Goldarmor's helmet catches his eye. He wants it and approaches Goldarmor. Goldarmor then calls reinforcements and they battle Mr. Hat. They later encounter each other again, with the situation still the same, only now the Goldarmor is alone to battle Mr. Hat. After the Mirror is destroyed, Mr. Hat is seen in the back of his shop, successfully taking Goldarmor's helmet. He puts it on and tries i's power. He is delighted and starts to think about how to expand his collection.

Mona: Mona awakens in the Colosseum, thinking she dozed off during her day job. She dismisses her situation as a prank but decides to do field research anyways. She encounters a Liquid Samurai and becomes instantly interested in his liquid properties, he, in turn, calls in reinforcements and they attack her. Later, Mona encounters the same Liquid Samurai, now alone. She still wants to study him, while he is confused about why she isn't scared of him. After that, Mona destroys the Mirror. Mona is then seen operating her bottle minigame and is revealed to have captured the Liquid Samurai. Her shift ends and she's ready to study him in the Potionarium.

Dark Reize: Dark Reize awakens in the Colosseum, blaming Specter Knight for his predicament. But he then realizes that this could be a chance to please The Enchantress, so he ventures forward to cause havoc. On his way, he encounters his uncorrupted self, Reize. He is pleased by this since he can destroy his good side once and for all, so he attacks. Later, they encounter each other again and Reize pleads with his evil side to return to the light. Dark Reize refuses and attacks. He then destroys the Mirror. Dark Reize is then seen on the rails, happy, as he is sure to have destroyed his good side. He is then suddenly called by The Enchantress, so he teleports to her.

Goldarmor: Goldarmor awakens in the Colosseum confused since he was just marching in the Pridemoor Keep with other Goldarmors. He then ventures forwards. He encounters his king, King Knight, and is happy to see him. He wants to ask for help, but King Knight shuts him down and tells him to serve him and find the way out. Goldarmor, disappointed, teams up with King Knight afterward. But soon after they are separated. When they are reunited, King Knight demands that Goldarmor does something useful. Goldarmor is fed up with him, refuses, and attacks his former king. He then destroys the Mirror. Unfortunately, he wakes up and thinks the whole ordeal has been just a dream. He is scorned by another Goldarmor and is last seen bowing to King Knight.

There are many modes in the game and such modes can be seen in a mode called Chester's Choice or in Story Mode:

Every playable character in Shovel Knight Showdown has a unique set of moves.

Note: Scanning the Plague Knight amiibo will unlock the Boomtech Set for Nintendo Wii U and Nintendo Switch players.

Note: Hold up-taunt for 10 seconds on the Tower of Fate- Spires stage to unlock Donovan, an alternate costume. Scanning the Specter Knight amiibo will unlock the Lich Lord Set for Nintendo Wii U and Nintendo Switch players.

Note: Scanning the King Knight amiibo will unlock the Ultimate Supreme Set for Nintendo Wii U and Nintendo Switch players. 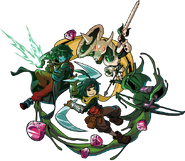 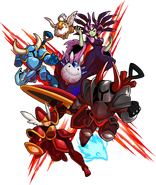