Skip is a recurring minor character in Shovel Knight: Treasure Trove, and a Fisherman annoyed by Treasure Knight's activities disturbing his work.

Skip has the same appearance and portrait as regular Fishermen, and he consistently wears blue clothes.

In Shovel of Hope, Skip can be found at the Armor Outpost, festering about Treasure Knight as his salvaging operations with the Iron Whale scare all the fish in the sea. In the 3DS version, Skip will offer

In the ending, he can be seen with Bag Fellows aboard the Iron Whale, emptying Treasure Knight's ill-gained treasures. He only leaves behind a single coin.

In Plague of Shadows, Skip can be seen at the Armor Outpost, out of reach. He will flee aboard the Aerial Anvil after Plague Knight's attack.

In the ending of Specter of Torment, Skip can be seen fleeing the Armor Outpost during the attack of the Enchantress and her army.

Skip's trade has been running low for months since Treasure Knight started scouring the Valley's waters with his Iron Whale. He proposes to sell his Scepter of Swiftness for 9 Merit Medals to King Knight in order to come by financially. He can be found at the beginning of its Heirloom Course, the Sprinter's Shoal. 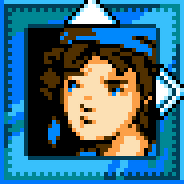 After buying his Heirloom.
Add a photo to this gallery

Retrieved from "https://shovelknight.fandom.com/wiki/Skip?oldid=32512"
Community content is available under CC-BY-SA unless otherwise noted.