Super Skeletons are major enemies in Shovel Knight: Treasure Trove. They initially appear as a mixed pile of giant bones, but upon their target's approach, they assemble into a giant skeleton that jumps toward him.

After three jumps, the Super Skeleton collapses into a pile of bones once more, and the cycle repeats. It possess eight hit points.

One of the Joustus cards in King of Cards is a Super Skeleton card, which can push other cards to the left, right, and down.

In Shovel of Hope, a Super Skeleton can be seen partying at the Lich Yard with Specter Knight, Grandma Swamp, and Mona in the credits sequence.

In the 3DS version, Shovel Knight can meet a friendly Super Skeleton, the Passmaster, who is the champion and host of the StreetPass Arena.

After the formation of the Order of No Quarter, a normal Super Skeleton can be seen leading the undead that are taking over the Lich Yard.

When first talked to at the Lich Yard:

"Super Skeleton: Oh wait,
you're
Specter Knight.
Nya ha ha!
Did I scare you? Jumped up and everything, just like you said."

"Super Skeleton: I kept your hideout safe and sound. Only Specter Knight gets in here. Nobody else, not a soul."
If talked to again:
"Super Skeleton: I promise, I'll keep an eye out... Both of 'em, in fact!
Nya ha ha ha!
"

At the Tower's banquet:

"Super Skeleton: Yeah, yeah, I know.. I'm not
really
Phantom Striker. Did I fool you?"

"Specter Knight: If you are here, then who guards my hideout?!" 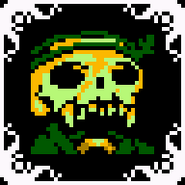 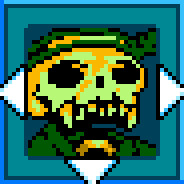 "Specter Knight", animated sprite.
Add a photo to this gallery

Retrieved from "https://shovelknight.fandom.com/wiki/Super_Skeleton?oldid=36915"
Community content is available under CC-BY-SA unless otherwise noted.