Teethalon is the Mini-Boss of the Iron Whale. It's a giant anglerfish with a big blue chest fit snugly around its lure, which is its only weak point. It has twelve hit points.

Teethalon resided at the bottom of the ocean near the Valley, where it fed on smaller fish (and perhaps other adventurers who dared to travel into its territory), luring its prey in with a lure that featured a ring that looked remarkably similar to one of King Knight's Rat Rope rings, until it was disturbed one day by King Knight in King of Cards. Despite being caught off guard by the monstrous fish, King Knight was able to defeat Teethalon and escape unharmed. Later, after King Knight officially joined the Order of No Quarter and ordered the Joustus tournament to be ended, Treasure Knight went to the ocean floor, broke the ring off Teethalon's lure, jammed a blue chest on its lure, and wrestled it under the ground, leaving it to antagonize Specter Knight, Plague Knight, and Shovel Knight in the other three campaigns.

Although Teethalon's battle varies between the four campaigns, one thing that always remains the same is that the fight is split into two parts: when first discovered, Teethalon chases after the player and can't be damaged, forcing them to simply avoid its attacks until they reach the section where the actual battle takes place. During the chase, Teethalon sometimes spawns Mini Anglers to try and catch the player as it pursues them. During the battle, the chest on Teethalon's lure will open, leaving it vulnerable to attack. Teethalon attacks by spawning three Mini Anglers, charging across the screen, and then reappearing on the other side of the screen to repeat the cycle.

In this campaign, the fight with Teethalon plays out exactly as described above. Its lure is immune to Shovel Drops, so Shovel Knight can only use Dig Slashes to damage it. The lure is also vulnerable to a well-aimed Propeller Dagger strike, a fireball from the Flare Wand, or a blast from the War Horn. After Teethalon is defeated, the blue chest that was stuck on its lure will fall to the ground and Shovel Knight can open it, revealing Chester inside. Shovel Knight can then buy the Throwing Anchor from Chester at this point.

In this campaign, Teethalon's fight is identical to how it was in Shovel of Hope, although the battle portion is considerably easier since Plague Knight can hit its lure from any angle with his bombs. After defeating Teethalon, Plague Knight can open the blue chest, which only contains the Throwing Anchor. He can steal the Throwing Anchor and trade it to Chester to receive the Vat.

Teethalon's fight in this campaign is very similar to how it was in the previous two campaigns, but with some minor changes; most of the platforms in the chase portion have been replaced with bubble blocks that disappear when stepped on, and the layout of the screen where the battle takes place has been altered. Regardless, Specter Knight can take Teethalon down easily as his Dash Slashes allow him to lock onto its lure and attack with deadly precision. Unlike in the other two campaigns, Specter Knight doesn't get to open the blue chest after defeating Teethalon; instead, he is simply rewarded with lots of gems and several small and medium blue fish that restore his health upon consumption. These fish are the only non-decomposed foods in the game that Specter Knight can eat to heal himself.

In this campaign, Teethalon appears at the end of Deep Sea Trench, one of the Iron Whale stages. At the stage's end, King Knight grabs the Rat Rope ring, only for Teethalon to crash through the ceiling and pursue him, forcing King Knight to go downwards to avoid the giant fish. As the chase progresses, Teethalon will sometimes charge downward to try and ram into King Knight, and then reappear at the top of the screen. Once King Knight reaches the bottom of the level, the actual battle ensues; unlike in the other three campaigns, Teethalon's lure is able to change directions when attacked due to it being stuck on a ring instead of in a chest. After defeating it, King Knight is rewarded with many gems and blue fish, just like in Specter of Torment.

Interestingly, in this level, the music changes to The Bounty Hunter when the chase sequence with Teethalon begins. It continues through the entirety of the battle, and then switches to The Price of Doing Business after Teethalon is beaten.

Throughout the chase and the direct confrontation, Teethalon will continually spawn Mini Anglers[1] from its writhing tongue. These smaller fish swim towards Shovel Knight, dealing damage if they hit him. If they miss, then they simply continue in the direction they were headed in. They can be killed with a single hit and can be Shovel Dropped to bounce over gaps between platforms during the chase.

One of the Joustus cards in King of Cards is a Teethalon card which has a Double Arrow facing down. It's also a Slam card. 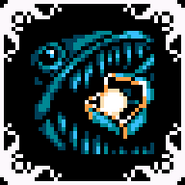 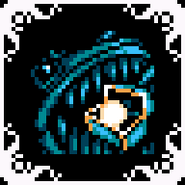 Older version of Teethalon's portrait in King of Cards. 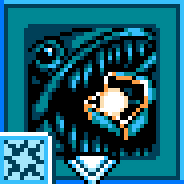 Retrieved from "https://shovelknight.fandom.com/wiki/Teethalon?oldid=36164"
Community content is available under CC-BY-SA unless otherwise noted.