Terrorpin is Black Knight's armored steed in Specter of Torment.

Terrorpin is a large black and red tortoise. It sports a rhinoceros-like horn and several spikes on its shell, providing him with an impervious defense. Specter Knight can bounce on its shell with Dash Slashes. It can also fire purple flames and bounce them back, like Black Knight. When in its shell, it can spin and glide, but also fly.

Like its master, Terrorpin also chuckles at their enemies.

After cornering Specter Knight at the end of the Plains, Black Knight whistles to call Terrorpin, which charges through a wall into the arena. When the knight is defeated, Terrorpin flees by blasting the same wall, incidentally opening an exit route for Specter Knight.

Terrorpin reappears with Black Knight at the Tower of Fate hub after Specter Knight sought out all Order of No Quarter knight candidates. They blast through a hole in the Magic Mirror chamber from the Tower's dungeon, with the intention of confronting Specter Knight. However, they go back the same way after the apparition of the Enchantress and Black Knight learning of her true identity. The passage they opened also contributed to the escape of the Dark Acolyte as well as a route to the Enchantress's lair.

Black Knight and Terrorpin appear again together at the end of the Tower of Fate's Entrance, this time to protect the Enchantress from a rogue Specter Knight. They change their tactic, but upon defeat Terrorpin falls off the tower. Black Knight, anguished, then jumps after it.

In the ending of Specter of Torment, Terrorpin was placed under the care of Polar Knight at the Stranded Ship. In a rare moment of affection, Polar Knight can be seen tending to its wounds by a campfire in the Frozen Tundra.

Terrorpin has a minor appearance in King of Cards. In the House of Joustus when Black Knight is ready to play Joustus, he brings out Terrorpin as a table for the board.

Black Knight engages Specter Knight using a different strategy: he fights while mounted on his trusty and shelled steed, Terrorpin. The two fight with a highly coordinated approach, along with some of Black Knight's more familiar moves. Only Black Knight can be damaged in these battles, Terrorpin is completely invincible.

When first fought in the Plains of Passage, Black Knight will stand atop Terrorpin, occasionally Shovel Dropping to either have Terrorpin a purple energy shot, or make himself more difficult to hit while Terrorpin charges. If Black Knight is off Terrorpin, Terrorpin will charge at Specter Knight.

The second battle at the Tower of Fate: Entrance however is far different from the first. Black Knight starts the battle on Terrorpin as it hovers high in the air, too high to Dash Cut into Black Knight. Attacks that target the duo at this time simply knock them slightly back causing no damage. While hovering he will attempt to slam the shell into the ground when Specter Knight is underneath.The attack sends two small shockwaves across the floor. Black Knight then follows up by summoning orbs of energy infused dirt to surround the duo, before slamming Terrorpin's shell into the ground launching the orbs up into the air. Dirt clusters then fall from the sky starting at the room's edges and ending next to where the duo is hovering. The next act has Black Knight running in place on Terrorpin's shell before sending the both ricocheting off the walls to the ground. During this moment Black Knight will be vulnerable to attack and can thus be knocked off Terrorpin, causing him to transition into his dismounted attack pattern until he remounts Terrorpin and the cycle repeats. 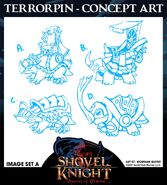 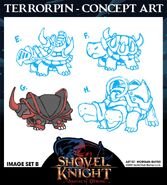 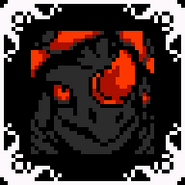 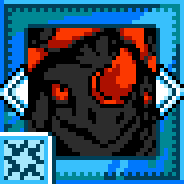 Retrieved from "https://shovelknight.fandom.com/wiki/Terrorpin?oldid=35916"
Community content is available under CC-BY-SA unless otherwise noted.