The Alchemeister is a Mini-Boss in Shovel Knight: Treasure Trove. He is required to beat to progress through the second half of the Explodatorium.

The Alchemeister is an old bearded man clad in a purple and gold robe and a purple hat. He can temporarily transform into a large yeti-like beast by drinking potions.

He possess 23 hit points and deals 2 damage points upon contact. He only drops treasures when defeated in normal form, but also a turkey when defeated as a beast.

In the end of Shovel of Hope, he can be seen at the Explodatorium in Plague Knight's newly founded advanced potion class. Along with the Magicist, he performs potion mixing and starts to drink the result. Plague Knight disturbs the transformation with his staff, resulting in the Alchemeister transforming instead into a body double of the Magicist. Both students then bow to Plague Knight.

The Alchemeister appears in the ending of Plague of Shadows, among the chaos at the Explodatorium under the new direction of Percy.

In Specter of Torment, the Alchemeister appears as one of the patrons at Creech's juice bar in Tower of Fate after Plague Knight joins the Order of No Quarter.

In King of Cards, two Alchemeisters can be seen conducting potions in the Tower of Joustus. The Alchemeister also has his own Joustus card.

One of the Joustus cards in King of Cards is an Alchemeister card which has 3 Bomb Arrows facing left, right, and up. 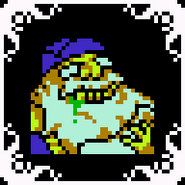 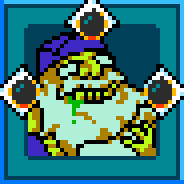 The Alchemeister's Joustus card.
Add a photo to this gallery

Retrieved from "https://shovelknight.fandom.com/wiki/The_Alchemeister?oldid=35967"
Community content is available under CC-BY-SA unless otherwise noted.