Shovel of Hope
King of Cards

Backed Into a Corner
The Big Creep is a boss in Shovel of Hope and King of Cards. In Shovel of Hope, it appears in the center room of either the first or second floor of the Hall of Champions once Shovel Knight has eliminated all of the Invisishades and lit up all the corridors. In King of Cards, it is encountered at the end of the Eerie Manor.

It appears to be a conglomerate of multiple Invisishades, as seen when it first forms. Like the Invisishades, it can only be harmed by attacking it with the Light Orbs. Defeating it for the first time in Shovel of Hope unlocks the Hall Champion Feat.

Originally, the Big Creep and its posse of Invisishades quietly resided away from society inside an Eerie Manor in the Lich Yard region. However, after King Knight, who had mistaken the mansion for Pridemoor Keep, invaded the residence and drove them away, the ghosts migrated en-masse towards the Hall of Champions, where they were then locked inside by Phantom Striker. The Big Creep was finally vanquished when Shovel Knight engaged it in battle.

Floating Skulls are summoned when The Big Creep loses two health. Two will float back and forth in a figure eight dropping smaller skulls that damage Shovel Knight while he tries to dodge the boss. They cannot be damaged but will burst into smoke when the boss is defeated.

Falling Skulls are spawned by floating skulls at a fast rate to make it harder for Shovel Knight to avoid the boss. They flash pink and blue and descend slowly toward the ground. 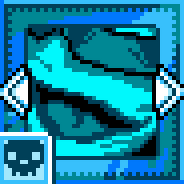 The Big Creep's Joustus card.
Add a photo to this gallery
Retrieved from "https://shovelknight.fandom.com/wiki/The_Big_Creep?oldid=36075"
Community content is available under CC-BY-SA unless otherwise noted.