Fit to be Crowned

The Grand Triumvirate is the final boss of King of Cards. He is the result of a fusion between the bodies and Essences of the three Joustus Judges merged together by the dark magic of the Enchantress.

The Grand Triumvirate is a giant golden robotic-looking figure resembling a king. He wears a huge crown and has a big beard, as well as two large blue gems sticking out from either side of his head. His hands, attached to chain-like arms, have fingers with spiked tips. Mounted on his back is a massive disk shaped like a sun with many points.

After the Grand Triumvirate's first phase is beaten, his face and body are destroyed, leaving only his hands and badly damaged head, the latter of which now features a much scarier skull-like face with bulging golden eyes and a grin of golden teeth. With the crown gone, a larger blue gem can be seen on top of the Grand Triumvirate's head.

During the first part of his battle, the Grand Triumvirate mostly attacks by shooting homing fireballs and trying to crush King Knight with his hands, but will also use attacks that reference the Joustus Judges. Sometimes, he'll shoot bouncing lasers from his eyes which are identical to the lasers King Birder shoots during his battle. Occasionally, he'll shoot bubbles from his ears and summon golden Troupples which try to jump up at King Knight. And periodically, he'll slam his hands into the ground to make spiky balls rain from the sky; these spiky balls are similar to the ones King Pridemoor throws during his battle but are colored differently. As the Grand Triumvirate uses these attacks, King Knight must attack the monster by Shoulder Bashing the blue gems on either side of the Grand Triumvirate's head.

Once the Grand Triumvirate's health is brought down to 4, his head will move to the center of the room and stay there for the rest of the battle, while his hands orbit around the head.

For both phases, one of the best Heirlooms to utilize throughout the battle is the Turn Coat, as King Knight can use it to negate damage from the projectiles that the Grand Triumvirate shoots at him. Using the Turn Coat is especially helpful during the second phase, as absorbing the Grand Triumvirate's projectiles with it can help prevent King Knight from falling off into the pit below. Equipping King Knight with the Rodent Regalia is also good for this purpose as it will cause King Knight to be rescued by Propeller Rats and only lose four hearts if he falls.

The Grand Triumvirate during the second phase. 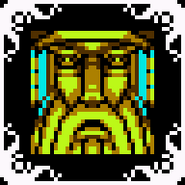 King Knight's portrait with the cheat code K&DMASK.
Add a photo to this gallery
Retrieved from "https://shovelknight.fandom.com/wiki/The_Grand_Triumvirate?oldid=36600"
Community content is available under CC-BY-SA unless otherwise noted.