Knight
Engineer of the Order

The Schemer
The Destroyer

Tinker Knight is one of eight Knights of the Order of No Quarter who serves the Enchantress and a brilliant engineer. He is the boss of the Clockwork Tower.

Tinker Knight is described as gregarious demeanor and hard working, always one step ahead with a plan beforehand. He valorizes safety as much as he hates taking risks. He was the only member of the Order of No Quarter with good intentions since the start, as he wished the group was fair and just and hoped it wouldn't be a force of evil. At the end of Shovel of Hope, he is seen building toys for Hoop Kid and Playing Kid, showing he has a liking for kids.

Mole Knight and Tinker Knight, as Shovel Knight Showdown states, are like oil and water. Tinker Knight believes that safety should always be the first thing to consider, while Mole Knight does what he thinks is the best thing to do, dangerous or not. They are notably similar however in that they are both strong leaders who thrive on control, which only leads to even more conflict between them. In spite of this, because of the Order, they work together sometimes, such as cooperating in the Magma Furnace of the Lost City.

In the opening phase of the fight you can defeat Tinker Knight with one hit from the Mobile Gear. If you can't, simply dodge the wrenches he throws as he runs back and forth, then when he trips, stay away from him as he will throw a temper tantrum, throwing wrenches in all directions.

Once he gets into his mech, the Tinker Tank, jump on the large missiles or Shovel Drop the bouncing bombs he fires to get up to the spinning lance. From there you have two options for damaging him. The first is to start pogoing on his head. The second is to hit his red shoulder missiles back at him (each one does one full circle of damage to him when it hits). You can also use your Throwing Anchors without having to get on top of his mech.

In Shovel of Hope, Tinker Knight is one of the knights of the Order of No Quarter who needs to be defeated in order to progress. Shovel Knight encounters him at the Clockwork Tower and the two have a battle, where Shovel Knight wins. He later reappears in the Battle Royale alongside the other knights but also gets defeated. At the end, he is seen making toys for children with the help of Armorer and Shovel Smith.

In King of Cards, Tinker Knight is paranoid, thinking that King Knight wants to take his robots and the two end up fighting because of the misunderstanding. At the ending, Tinker Knight is seen at the Birder Bluffs in his way to the Tower of Fate after being recruited to the Order of No Quarter.

"Tinker Knight:
Aah!
Did you make all that noise? I can't think straight!! I have so much work to do!"
"Shovel Knight: Just work on letting me past, little friend."
"Tinker Knight:
Ohhhhhh
, big words, tin man! I'll show you a thing or two!"

"Tinker Knight: Oh, look, it's Plague Knight! I heard you might show up! Why have you come here?"
"Plague Knight: Ah, the esteemed inventor! I
do
so respect your craft, hee hee... Relinquish your Essence and you won't be harmed."
"Tinker Knight: What? I don't think so, bird mask. You have your own brain, use it or lose it!"

"Tinker Knight: What are you, some kind of ghost? Get out of my shop, I have work to do."
"Specter Knight: The Enchantress would like a word. We have an army to raise, and talented engineers are in short supply."
"Tinker Knight: Ha! You may be a tool, but I am not. Time to make short work of you!"

"Tinker Knight: Tools of war can force a kind of peace, but I think our rule should be fair and just. None but fools would break things and not rush to fix them."

"Tinker Knight:
Ahh!
Who are you? Are you friend or foe?"
"King Knight:
Ahh!
I'm just passing through this abandoned house! Are you a ghost? I've seen so many ghosts lately!"
"Tinker Knight: I'm no ghost, but I am a fool. I tried to make men from brass and tin. This time I went too far. Now they have a mind of their own! I thought they would fight for me, but in the end, I hide here. Are you here to take them? No, I can't let you use them.
Leave, now!
"

"Tinker Knight: When I left, men of tin swept through the halls of my proud home. I plan to build parts out of their scraps. But first, I have time to play a match or two."

"Propeller Knight: Our chance to escape draws close! The Flying Machine can't be far off! Get in gear!"
"Tinker Knight: Wait... It seems like we are dead lost, and you did not think this through. When you said you had a plan...did you lie to me?"
"Propeller Knight: ...Perhaps I fly by the seat of my pants. But I'm the best of misfortune, not spinning my wheels! I didn't see
you
offering any ideas from your hiding place over there!"
"Tinker Knight: You did not ask, you just
talked.
Like you still do, right now. But no more from you,
I've had it!
" 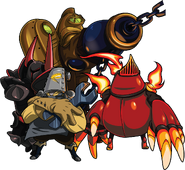 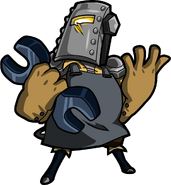 Beckoning for a brawl. 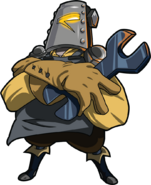 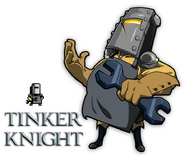 Concept art for Body Swap Tinker Knight.
Add a photo to this gallery 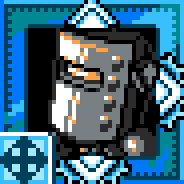 Add a photo to this gallery
Retrieved from "https://shovelknight.fandom.com/wiki/Tinker_Knight?oldid=37567"
Community content is available under CC-BY-SA unless otherwise noted.