Toader is a minor character in Shovel Knight: Treasure Trove. Unlike Croaker, he is rather moody and looks for ways to be cheered up.

Toader is a bipedal frog with a dark green hue, wearing a dark grey vest and black trousers. While his counterpart is lighthearted and cheerful, Toader is grumpy and doesn't approve of puns.

In Shovel of Hope, Toader can be found in the Armor Outpost. Shovel Knight tells him puns to cheer him up, but Toader disapproves them.

Toader also appears in the Mysterious Area after the exclusive fight with the Battletoads. He frowns at Croaker's Battletoads puns. Occasionally, he ends up in the middle of the pose the Battletoads and Shovel Knight are striking. He leaves, annoyed, while Croaker poses too.

Toader reappears in the ending with Croaker and the rest of the Village, who are cheering on the defeat of the Enchantress while he still looks grumpy.

In Plague of Shadows, Toader can be seen in the Armor Outpost and will flee with the rest of the townsfolk Plague Knight's invasion. After the battle, he escapes with them on board the Aerial Anvil.

Croaker reappears in the ending, watching the fall of the Tower of Fate and celebrating with the townsfolk at the Village.

Toader, much like Croaker, can be found in the Houses of Joustus, specifically the Cavern of Joustus and the Crag of Joustus. Like Croaker, he gives King Knight puzzles to solve, but he insists he cannot solve them and tells King Knight that they're impossible. If the player beats his puzzles, they are rewarded with a merit medal.

When talked to at the outpost:

Toader at the Cavern of Joustus:

"Toader: Puzzles. Bah. They're just a waste of time! Apparently, you can win in one turn, but I can't solve it! Take a look if you like. It's not like I'm making any progress."

After beating the first puzzle at the Cavern of Joustus:

"Toader: I tried for hours. Hours of my life. Wasted. I'm just not that smart. Well, thanks, I guess... I didn't mention this before, but there are actually three puzzles. Regrettably, the second one is even worse. There's... Certainly no solution. But you can try, if you want."

After beating the second puzzle at the Cavern of Joustus:

"Toader: Here's the last puzzle. If you solve it, that's everything! Which leaves me.. With absolutely nothing. Great. This final one... It's impossible. You'll see. Want to try?"

After beating the third puzzle at the Cavern of Joustus:

"Toader:
Sigh..
Well, that's all the puzzles solved. Take this card. I'm sure you'll use it more wisely than I."

When talked to after beating all of the puzzles at the Cavern of Joustus:

Croaker and Toader at the Crag of Joustus:

"Croaker: Hop over to our pad and lend us an ear hole. Water we gonna dew about this puzzle?"

"Toader: Sorry, I don't know. Ugh, maybe
he
should just solve it."

After beating the first puzzle at the Crag of Joustus:

"Croaker: You solved it! I'm green with envy. Your skills are so fly, you've got me tongue-tied! We overheard the champion down below. They had quite a husky voice! It's hard to
convey
howl ruff this puzzle is. Want to try wolfing it down?"

After beating the second puzzle at the Crag of Joustus:

"Croaker: We'd treasure your help on this last one. It's gild our enthusiasm. Truly, we're gemboozled!"

"Toader: Cascade arrows make my cards and my head spin... But you can try it.."

After beating the third puzzle at the Crag of Joustus:

"Croaker:
Wow!
Truth be toad, we knew you'd swim through this webbing of puzzles! Take this, chum."

When talked to after beating all of the puzzles at the Crag of Joustus:

"Toader: I don't know what's worse.. The puzzles, or the jokes. I can't believe you endured it all." 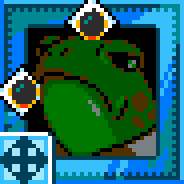 Sprite.
Add a photo to this gallery
Retrieved from "https://shovelknight.fandom.com/wiki/Toader?oldid=33366"
Community content is available under CC-BY-SA unless otherwise noted.