Knight
Financier of the Order

Treasure Knight is one of eight Knights of the Order of No Quarter who serves the Enchantress as well as a ill-famed pirate. He is the boss of the Iron Whale, his personal submarine.

Treasure Knight and Propeller Knight have a mutual respect for each other. Although they respect each other, Treasure Knight is umbrageous and thinks no one should be trusted, so he never fully trusts the sky pirate.

Treasure Knight employs a high mobility fighting style, using his retractable anchor to deal damage and move around the arena at high speeds. He also relies on caltrops thrown into the arena to provide area denial and control.

"Treasure Knight: My gems... My vessel... My ocean. Your very presence tarnishes."
"Shovel Knight: You are to lay claim to the sea itself? Your greed knows no bounds, Treasure Knight."
"Treasure Knight: Your hands are no less dirty. Even now, others are paying for your avarice. Let us duel. Winner take all..."

"Treasure Knight: What's the matter, Plague Knight, alchemy business slowing down? Here to make some coin? Or are the Order's coffers running dry? Can't you just synthesize all the fool's gold you want?"
"Plague Knight: Ha! Good guess! But no, it's something
far
more important than mere gold."
"Treasure Knight: !!!
More important than gold?
Now you're just being ridiculous. Get out of here you bottom-feeder!"
"Plague Knight:
Ooooooooh
, your Essence is showing,
hee? ?hee? ?hee!
I hope you don't mind if I help myself!"

"Treasure Knight:
*sigh*
I just brought my ship to the surface...and already I find a beggar on board."
"Specter Knight: I'm not here for a hand out. Instead I bring a proposition...unrestricted salvage rights and a place as the Enchantress' financier."
"Treasure Knight: Oh, I'll
gladly
spend gold to make gold. But how can I take your word that my investment would be secure?"
"Specter Knight: Our deals go far beyond words. Behold a glimpse of the power she commands!"

At the tower's banquet:

"Treasure Knight: I was told there was a banquet hall. This? This is a travesty. The only thing fit to order here... is a complete renovation."

"Treasure Knight:
Curses!
That fish had drawn near! I waited for hours! You scared it away, with that gilded getup!"
"King Knight: Gilded indeed, workman! Have you no respect for your betters? You've found royalty!"
"Treasure Knight: I respect only one thing, and that's wealth... but you appear to be
wearing
most of yours!"
"King Knight:
Thank you!
The trick with gold polish, you see, is small clockwise circles, with a soft brush."
"Treasure Knight: I'll bear that in mind as I toss it in the vault. And you overboard, with the other worthless trash!"

"Treasure Knight: As if this...
"ship"
would be seaworthy. Dry lungs, indeed! Sailing the skies... What folly! Perhaps playing Joustus will distract from the poor atmosphere." 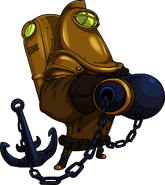 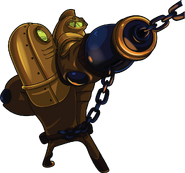 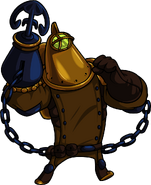 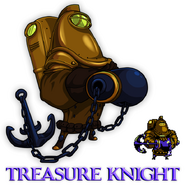 Concept art for Body Swap Treasure Knight.
Add a photo to this gallery 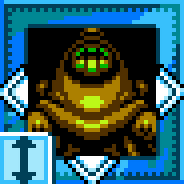 Treasure Knight in Pocket Dungeon.
Add a photo to this gallery
Retrieved from "https://shovelknight.fandom.com/wiki/Treasure_Knight?oldid=37568"
Community content is available under CC-BY-SA unless otherwise noted.