Troupple King is a character of Shovel Knight: Treasure Trove who resides in the Troupple Pond. He is the leader of the Troupples and treats others as mortals and himself as a god. He appears to those who seek him and carries a Troupple Chalice.

In Shovel of Hope, the Troupple King can fill Shovel Knight's chalices with one of his three Ichors. He will perform a dance the first time he fills a chalice. Additionally, he will get mad at Shovel Knight if he falls into or attempt to fish in his pond.

The Troupple King's loyal follower, the Troupple Acolyte, can be found in the tavern inside the Village and sells chalices.

In Plague of Shadows, Plague Knight uses the Troupple King's services to enchant his cloak to bestow it new powers, similarly to the Armorer improving Shovel Knight's armor at the Armor Outpost. However, he requires gold for it, recognizing the knight's villainy.

Additionally, Plague Knight can also learn how to dance when visiting the Troupple King for the first time and witnessing his dance. By holding [Down], Plague Knight will starting waltzing by himself. This can be done at anytime, except when near Mona, where Plague Knight will instead shyly tap his fingers together.

A different Troupple Acolyte can be found in the Armor outpost. She sells the chalice required to meet the Troupple King.

The Troupple King appears at the end of Specter of Torment to reform the Enchantress's servant, the Dark Acolyte, into his own follower, the male Troupple Acolyte met in the other campaigns.

The Troupple King has a major role in King of Cards, being one of the three Joustus judges. After being defeated, he accepts defeats after a Troupple Acolyte tells him about King Knights quest for the Joustus crown. Later he can be seen in the Glidewing, selling decrees once he's unclogged. To unclog him go the room with the Ledge Farmer and fall of the edge then shoulder bash the wall, then transiting into a twirl, thus unclogging the Troupple King.

The Troupple King is shown to be very serious and far more intolerant to disrespect than other kings, being very unforgivable and screaming at people, such as when they fish in his pond. However, he has also shown a rather silly side too, such as in his dances where he does goofy actions and faces.

These are following attacks the Troupple King will use:

Note: This is Troupple King's deck in Challenge Mode. He can't be battled in the normal campaign.

When speaking with the Troupple King but canceling any request:

When Shovel Knight has an empty Chalice:

"Troupple King: I sense a Troupple Chalice! I can fill it with magical Ichor. That's pronounced eye-core. Choose your Ichor wisely..."

When choosing to fill a Chalice but declining afterward:

When filling a Chalice for the first time:

"Troupple King: Subjects! A new initiate joins us! The ceremony shall commence!"

When visiting him again:

When asking the Troupple King to dance:

After the Troupple King finishes his dance.

When falling into the pond:

"Troupple King: Do not sully our waters with thy filthy body! Next time, I won't be so merciful!"

When fishing in the pond:

"Troupple King:
What do you think you're doing!?
"

When first spoken to:

"Troupple King: Who has awakened me?! Mortal! Dost thou need... Wait a tic! Alchemist! News of thy villainy has reached the Troupple Pond. Begone from this sacred grotto!"
"Plague Knight: But, uh, my liege... Hee hee. I've actually come to learn to d-dance. See, I can only sorta twitch..."
"Troupple King: Enough! Disgraceful! Where is the
motion
? Where is the
passion
!? Thou needst a miracle! Wilt thou receive the gift of rhythm, humble alchemist?"

When refusing or canceling any requests:

When accepting the gift of dancing:

"Troupple King: As it happens, we are miracle workers. No one is without hope... Places, everyone!"

After finishing his dance:

"Troupple King: And that's how it's done! A true dancer holds [x] to practice! I shall grant you my Ichors, but... only for noble causes!"
"Plague Knight: Oh, uh... Hahaha,
certainly!
Noble is my middle name! Hee hee hee!"
"Troupple King: I still require a nominal repentance fee, for proper sanctification. Now.... choose your Ichor wisely!"

When visiting him again:

When asking for a new cloak:

When asking again for the dance:

After finishing the dance:

"Troupple King: And that's how it's done!"

When bringing the Pandemonium Chalice to the Troupple King:

"Troupple King: Mortal!
A Pandemonium Chalice!?
Impossible! I thought they'd all been destroyed long ago. Allow me to gaze into its swirling vortex... and hold still for a moment as I grant you new power!
*hrp*
"

When fishing in the pond:

"Troupple King:
What do you think you're doing!?
"

When falling into the pond:

"Troupple King: Do not sully our waters with thy filthy body! Next time, I won't be so merciful!"

"King Knight: The second Joustus Judge is nowhere to be found in this reeking bog. My cape is sodden with muck!"

After bashing the boat again:

After the battle, if King Knight falls into the pond:

"Troupple King: Blazes! What of this charlatan, then? He churneth a murk into my waters! Troupples, bubble him to me!"

When seeing him for the first time at the Glidewing:

"Troupple King:
Oh ho ho!
Surprised to see me, young man? I simply had to accompany my most trusted
*ngggchk*
acolyte! I meant to lend my aid, but alas.. Outside of the protective waters of my grotto, I am beset by allergies most foul. It's...
This is dreadful,
It's my... Blowhole. Here I hang thickly congested. How doth one unclog a waterlogged god?"

If talked to again while still congested:

"Troupple King: I meant to lend my aid, but alas.. Outside of the protective waters of my grotto, I am beset by allergies most foul. It's...
This is dreadful,
It's my... Blowhole. Here I hang thickly congested. How doth one unclog a waterlogged god?"

"Troupple King:
Ahhhhhhhhhhhhh!
Providence!
Graces!
My mind hath cleared, as if from a fog! Glory to thee! A thousand thanks. Now, let us attend to matters at hand. A judicious king issueth forth decrees! May my wisdom thee in by decrees. Wouldst thou wish to write one?"

If talked to again after that:

"Troupple King: My graces are thine, child. Shall we examine thy kingly decrees?"

"Troupple King: I advise issuing forth decrees, mortal, lest you become as exposed as my fins!"

Illustration of the Troupple King. 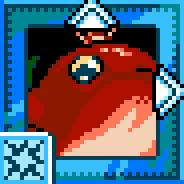 The Troupple King in-game.
Add a photo to this gallery
Retrieved from "https://shovelknight.fandom.com/wiki/Troupple_King?oldid=37691"
Community content is available under CC-BY-SA unless otherwise noted.