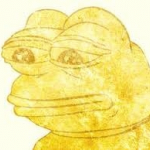 Rarest of the pepes

Hello, my name is the rarest of the pepes, I started playing shovel knight at Christmas time, Some think the game is hard, but I consider it balanced in difficulty. I think the game is really enjoying and that's why I joined this wiki.

Some facts about me

Retrieved from "https://shovelknight.fandom.com/wiki/User:Rarest_of_the_pepes?oldid=9783"
Community content is available under CC-BY-SA unless otherwise noted.