Start a Wiki
Villagers are minor characters in Shovel Knight: Treasure Trove. They usually roam the Village and Armor Outpost.

In Shovel of Hope, Villagers can be found at the Village and Armor Outpost, giving adventuring tips. One of them appears at the Forest of Phasing, hinting at the use of the Phase Locket to pass the stage.

In the ending, a Villager can be seen among the Village's inhabitants celebrating the fall of the Tower of Fate.

In Plague of Shadows, Villagers can be found at the Village but are scared off by Plague Knight. One of them flees aboard the Aerial Anvil after Plague Knight's invasion of the Armor outpost.

In the ending again, a Villager is among the crowd watching the Tower of Fate crumbling down.

A Villager appears in the ending of Specter of Torment, fleeing from the village by the Lich Yard overrun by the dead.

"Villager: Pick up blue jars to restore your magic power!"

"Villager: You know those glass checkpoints? You can break 'em for treasure... But if you do, they stop being checkpoints!"

"Villager: Yikes! Spikes! If only I could phase away to safety, I could cross and get so much treasure!"

"Villager: Should I spend my money or save up? Is the risk of losing it all worth it?"

"Villager: The Armorer will hold onto any armor you buy, and he'll let you swap 'em out whenever you want!"

"Villager: Did you know you can hold [x] to speed up a Joustus game? That way, you can get to your next turn quickly. Yup, it makes the action speed up quickly and cleany, and gets you through all that flowery extraneous fluff!" 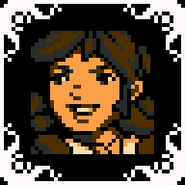 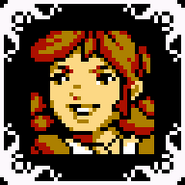 Villager's portrait with a red palette. 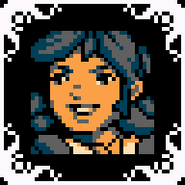 Villager's portrait with a gray palette.

Third alternate color palette.
Add a photo to this gallery

Retrieved from "https://shovelknight.fandom.com/wiki/Villager?oldid=35812"
Community content is available under CC-BY-SA unless otherwise noted.