The War Horn is a Relic that can be used to destroy enemies in a small area around the player. It is one of the most powerful Relics as it immediately destroys enemies that are in its range, but it is very costly on the player's magic. The War Horn can be purchased from Chester in the Stranded Ship for 4000 gold or in the Village for 5000 gold if it was not picked up before completion of the level. It is is the subject of the Boom! feat, which is earned by defeating 5 foes at once using the War Horn.

The War Horn returns in Shovel Knight Dig, where it can be bought from Chester for 650 gems. 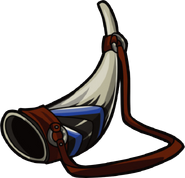 Official art.
Add a photo to this gallery
Retrieved from "https://shovelknight.fandom.com/wiki/War_Horn?oldid=32943"
Community content is available under CC-BY-SA unless otherwise noted.