Wizzems are minor enemies in Shovel Knight: Treasure Trove appearing through various stages as one variant or another. They resemble typical wizards with pointy hats and cast elemental magic. In Specter of Torment, some of them appear wandering the Tower of Fate hub.

All variants (except Dark and Dark Lantern Wizzems) have three hitpoints, and all deal one full damage point. Wizzems slowly charge up a magic attack before firing it. They are always stationary although they will sometimes turn around to face their foe. They all drop two yellow gems both worth 20 gold when defeated.

Flare Wizzems are by far the most common variety. They mainly appear at Pridemoor Keep and then in other minor stages such as the Mysterious Area.

As their name implies, their attack is very similar to the fire orb shot by the Flare Wand. It can be reflected back in a curve with a well-timed Dig Slash.

Frost Wizzems are exclusive to the Stranded Ship.

Their attack is identical to the Flare Wizzems except that the orb drops snowflakes periodically as it travels, damaging anyone standing below. The falling snowflakes are reminiscent of Plague Knight's Frost Burst. The orb can deal more damage than common attacks. The orb and the snowflakes can be destroyed but not deflected.

Gear Wizzems are encountered in the Clockwork Tower and the Tower of Fate: Entrance.

Their attack is notably different from that of any other Wizzems; rather than a small orb that travels forward, they create a gear. The gear will always fall downward if it can and moves forward until it collides with something which will cause it to turn around. Dig Slashes will not reflect these gears but rather cause them to get tossed over Shovel Knight.

In Specter of Torment, their gears can be knocked up and stay in the air for a few seconds, while Specter Knight can use them for Dash Slashes and destroy the gear he cuts through.

Lightning Wizzems are exclusive to the Flying Machine.

Their attack can be quite tricky to dodge. They fire an electric orb that immediately splits into two smaller projectiles once it's directly above or below the player. When the orb splits, one projectile goes up while the other goes down, and they both move very quickly which makes them difficult to dodge. If the projectile is hit before it reaches its target, it will instead split immediately. With a well-timed attack, the split projectiles can hit the caster and defeat it in one hit with the accumulated damages.

Ironically, they don’t appear in Specter of Torment as enemies, but they can still be found in the Tower of Fate hub as NPCs once Specter Knight beats the Flying Machine.

Dark Wizzems are exclusive to Specter of Torment and replace Flare Wizzems in Pridemoor Keep while also appearing in Tower of Fate: Entrance.

They shoot a dark wisp-like homing projectile that can be dash-cut by Specter Knight to reach higher places. Unlike other varieties, they have only 2 hit points.

Gold Wizzems never appear as actual enemies, but they do make an appearance in the ending scenes of Specter of Torment. They are seen gilding Pridemoor Keep for the glamorous reign of King Knight.

Dark Lantern Wizzems are exclusive to King of Cards. They appear in Pridemoor Keep.

Like Dark Wizzems, they cast a wisp-like homing projectile. However, the projectile they cast is encased in a lantern which King Knight can Shoulder Bash or bounce on while spinning. Dark Lantern Wizzems also only have two hit points.

One of the Joustus cards in King of Cards is a Wizzem card which can push other cards up, down, and to the left.

"Wizzem: The knights with higher bounties on the Magic Mirror are probably more difficult to defeat!"

"Wizzem: The Enchantress is so mysterious. Where did she come from? Who is she?"

"Wizzem: Our army is
invincible!
Even the most legendary or stalwart knights could never stand a chance!"

"Wizzem: We've gotta get in gear around the Clockwork Tower! The worst, though, is when our tools break.
Because it takes tools to fix tools.
"

"Wizzem: The banner above us is chewed to shreds. How could the champion of this House of Joustus allow that?"

"Wizzem: As I informed Specter Knight, the card printing is going at full speed. We simply cannot keep up with demand!"

Dark Wizzem at the Tower of Fate:

"Wizzem: Countdown Arrows are strong, but they disappear after a few turns. Like, I dunno, magic. Y'know?"

A Flare Wizzem with various other enemies. 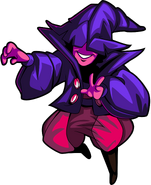 Artwork of a Dark Wizzem. 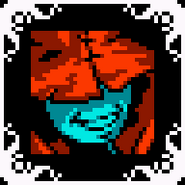 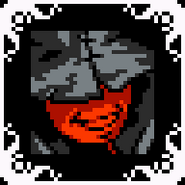 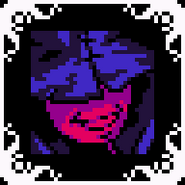 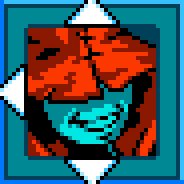 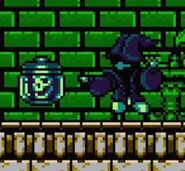 Dark Lantern Wizzem in-game.
Add a photo to this gallery

Retrieved from "https://shovelknight.fandom.com/wiki/Wizzem?oldid=37369"
Community content is available under CC-BY-SA unless otherwise noted.