The Yoppler appears as a short man, possibly a dwarf, with a long, blonde beard. He wears green overalls with a yellow undershirt, and a green/yellow hat. He wields a long, golden alphorn slung around his back.

In Shovel of Hope, the Yoppler can be seen at the Armor Outpost, in the back of the Aerial Anvil airship with the Airship Enthusiast. He has a fondness for instrumental horns. If Shovel Knight blows the War Horn next to the Yoppler, he will blow his horn in response and drop Magic Jars.

In Plague of Shadows, the Yoppler makes a brief appearance in the Aerial Anvil as Plague Knight is falling into the Armor Outpost. He is not seen aboard when the airship leaves the outpost.

In King of Cards, the Yoppler appears in the Crag of Joustus. If King Knight uses the Horns of Heralding near him, he will blow his horn and create a Whirlwind that will take King Knight to Oolong and a chest containing the Yoppler's Joustus card if he goes a screen above and Shoulder Bashes the wall, causing him to spin and go down a screen into the Yoppler's horn.

In Shovel Knight Showdown, the Yoppler appears in the stage Village - Town Center. Every so often, he will blow his horn, knocking back all players in a large area around him but dealing no damage.

"Yoppler: Horns.The finest instruments. But they only
really
come to life in a
duet!
"

"Yoppler: Horns.The finest instruments. But they only
really
come to life in a
duet!
Metaphorically, I mean." 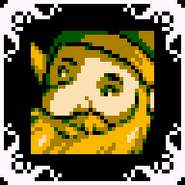 Older version of Yoppler's portrait in King of Cards. 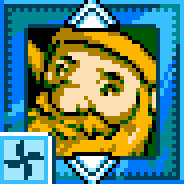 Retrieved from "https://shovelknight.fandom.com/wiki/Yoppler?oldid=36046"
Community content is available under CC-BY-SA unless otherwise noted.